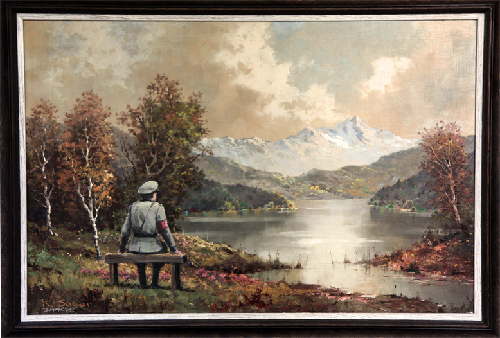 Street artist Banksy has been busy thsi October in New York City putting up public installations and tagging buildings throughout the entire city. And, as quickly as he puts them up, they’re being cut out and auctioned for tens of thousands of dollars.

In his latest stunt, the anonymous artist purchased a landscape painting from not-for-profit thrift shop Housing Works. He then painted in a Nazi sitting on a bench viewing the scenery. The painting was then re-donated to Housing Works, who has decided to auction off the work. The title of the work is “The Banality of the Banality of Evil.”

The title is derived from Hannah Arendt’s work “Eichmann in Jerusalem.” Arendt, who covered the trial of Nazi Adolf Eichmann, characterized the man as a disinterested bureaucrat, not a murderous villain. As Open Culture notes,

To Arendt’s mind, Eichmann willingly did his part to organize the Holocaust — and an instrumental part it was — out of neither anti-semitism nor pure malice, but out of a non-ideological, entirely more prosaic combination of careerism and obedience.

See the work below.