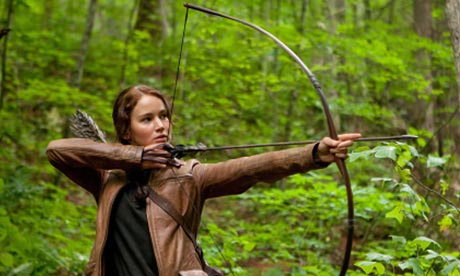 If you’re wondering what the late Jean Baudrillard would have to say about the blockbuster hit “The Hunger Games”, fear no more. The International Journal of Baudrillard Studies released a new issue last month and tackled serious questions like:

And of course, what would Baudrillard have to say about “The Hunger Games?”

Never fear, because Graham Potts has the answer. Potts, a doctoral candidate at York University in Toronto, thinks the success of “The Hunger Games” derives from Americans desiring their own death as colonizers:

What is new with The Hunger Games, that which piques our interest and seduces our wallets is that it allows us to watch ourselves on screen but identify (morally) with those whom we oppress. Hollywood gives us a cynical spectacle of ourselves and as residents of the ‘real’ Capitol we cheer at the most basic of – highly sanitized – survival and combat skills evidenced in The Hunger Games which we have lost, and perceive these images and themes as suitable for young children. And remember, the overall message that is depicted is our own depraved relationship with our ‘former’ colonial possessions. One must remember that the residents of the Capitol don’t participate in the Hunger Games. They watch, existing telematically through the tributes on whom they wager and place bets – colonial subjects, most of whom will soon be dead.

Potts goes on to describe how “The Hunger Games” phenomenon intersects with reality television and our own desire to “relish becoming the hunters”:

So our Hunger Games is not just a movie. It is our contemporary mode of being where we are subjected to conquest down to our genetic structure. In The Hunger Games the children are chosen by weighted lot to participate as tributes in the Games, with each entry tagged by DNA sampling. Almost all of the children are terrified to participate in the Games, other than the few that train from childhood to participate in them, all well-fed members of the privileged Districts. Like these few, we are taught to fight to become tributes, to relish becoming the hunted, which explains the contemporary phenomenon of Reality Television where the cameras prey upon and look to find our hidden secrets and exploit them down to the most binary level.

Read the full article at IJBS.