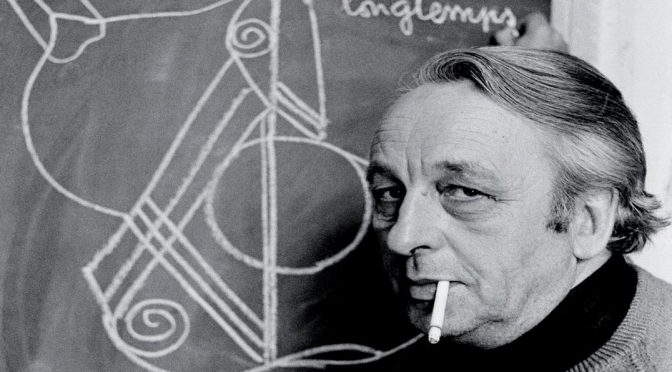 At the risk of over-simplification, the French Marxist Louis Althusser’s development of his theory of ‘interpellation’ is incredibly useful for understanding the extent to which our subjectivity—or the discourses through which we can articulate what it means to be a ‘self’—is shaped by all manner of ‘simple’ and ‘everyday’ things, such as pop music.

Perhaps one of the most evocative illustrations of pop music’s connection to the concept of interpellation can be found in the opening moments of the film High Fidelity—based on the Nick Hornby novel by the same name—where the protagonist, played by John Cusack, poses the question:

The insight this question provides regarding the concept of interpellation is to be found in the quote’s complication of conventional notions of rational agency. Rob, Cusack’s character, isn’t sure if he listens to songs about heartbreak and loss because he is miserable in the aftermath of a breakup, or whether he is miserable in the aftermath of a breakup because of the sheer familiarity he has with what we could call the subject of heartbreak. In other words, Rob’s question poses the possibility that he might feel very differently about what a breakup means if popular songs (and other popular media like cinema or television) depicted breakups other than as soul-destroying episodes that ruin lives.

The way this illustrates Althusser’s theory of interpellation is that it suggests that our sense of self, rather than being something ‘natural’ that simply springs forth from us, is in fact ideological—that is to say, shaped by our culture and in such a way that this shaping is forgotten or disavowed. This is to say, when I respond to a breakup in precisely the way that my culture affords, it is more common to assert that “this is simply natural” than to pose questions about whether such a response seems normal only because of its ubiquity—i.e., only because I have encountered it time and time again in popular texts.

The point to make, however, is not that we are beholden to the ideological subjective positions that popular media offer us, and that we must there therefore look for ‘less ideological’ forms of art to enjoy. Instead, the question becomes one of how we are to read popular texts—like songs about heartbreak, for example—in such a way so to locate different subjective positions than those that have become seemingly hegemonic.

For example, if we take a popular song about heartbreak and loneliness like The Smiths ‘How Soon is Now?’, it looks, on face value, to present this exact interpellative function that we have been describing. The song presents us with what appears to be a fly-on-the-wall view of a lonely young man who is told about a nightclub by his friend, the visitation of which, his friend suggests, will allow him to finally meet someone. The lonely young man feels accused by his friend of going about romance in “the wrong way”, and is offended by this and reminds his friend that he, the lonely young man, is “human and needs to be loved, just like everybody else does”. Later in the song it is revealed that the lonely young protagonist does go to this nightclub only to stand on his own, leave on his own, go home and “cry and want to die”. Such sentiments could strike the listener as painfully lugubrious and almost bathetic in its reproduction of clichéd sentiments about heartbreak. Moreover, one could be forgiven for viewing this text as functioning in the ideological manner outlined above, insofar as it makes the inability to find a partner appear naturally and unproblematically devastating, as if one’s capacity to find love is ‘naturally’ and ‘universally’ more significant than other forms of praxis such as political action or aesthetic accomplishment, for example.

Yet, another way of reading this text does present itself, and, the only thing the reader needs do to open themselves to such a reading is to put aside the assumption that the text is addressing some external story or state of affairs, so as to attend to the possibility that the text is actually addressing the listener. When Morrissey sings “you shut your mouth/how can you say/I go about things the wrong way?/ I am human and I need to be loved/just like everybody else does” it is very easy to assume that Morrissey is addressing some friend or acquaintance who has made the mistake of attempting to offer advice on the ‘right way’ to go about romance. In this reading, the song seems to be simply about romance, about the struggle to find love, and one that all the while reaffirms the centrality of romantic love to our contemporary subjectivity.

However, the song also seems to afford a more existential interpretation. For example, what if we took the song to be addressing the listener and not a ‘character’—the lonely young man or their friend—that the listener is meant to identify with? What such a move potentially reveals is a song that raises questions about what we could call the ontological status of isolation or alienation—i.e., raises questions about what these phenomena actually mean. Can you be alone, alone at a club, walking home alone, going home alone and wanting to cry and die because of feelings of isolation and alienation, even if you are surrounded by people or in a committed relationship? Indeed, while we mostly receive pop music as affirming the simplistic binary: in love = good; out of love = bad, is it not possible that one could more or less coincide with the conventional subject of romance—being with someone, having a stable relationship or regular sex, etc.—and still have done nothing to engage the question of a more fundamental sense of aloneness and alienation that permeates our sense of ourselves?

Approached in this way, Morrissey’s line “you shut your mouth/how can you say/I go about things the wrong way?/I am human and I need to be loved/just like everybody else does” might be not so much a message for the protagonist’s ‘friend’—the character we presume to reside ‘in’ the song—but instead is a form of interpellation, a hailing or addressing that offers us the position of considering the ontological status of love and aloneness aside from the conventions of our present culture. Indeed, if we sneer at Morrissey’s lugubriousness or sentimentality, or if we praise him for expressing what we ‘naturally feel’ in moments of heartbreak, it is because we feel we ‘know’ what a sophisticated or complex depiction of heartbreak looks like, and have, therefore, disavowed the constructed character of such a ‘natural’ feeling.

Indeed, while we might agree with Morrissey that needing love as fundamental to human existence, what exactly love means or what forms it could take can only be posed as serious questions if we distance ourselves—even if only temporarily—from the conventional ways of posing such questions—or, as Morrissey might say, we can pose such questions anew only if we first learn to “shut our mouths.”