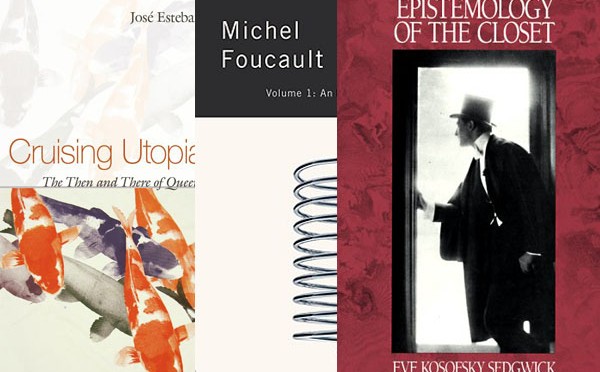 Queer theory is a rapidly growing field in the critical theory tradition. Often examining the intersection of capitalism, gender, heterosexism and the state, queer theory is constantly seeking to break down norms and question the status quo. We spoke to a few queer theory aficionados and came up with this list of 20 must-read queer theory texts.

We’ve provided links to articles where available. All book links are to Amazon.

“Profit and Pleasure” is a groundbreaking attempt to understand the relationship between capitalism and sexual identity. Rosemary Hennessy boldly reorients queer theory away from its preoccupation with psychoanalysis, language, and performance, instead insisting upon close analysis of the structures of late capitalism, labor, and commodification. She argues that sexual identity has always been linked to gender, race, and nationality, but these identities themselves arise from capitalism. As globalization transforms capitalism, it also transforms sexual identity, opening up both new forms of commodification and new opportunities for agency. On the one hand, middle-class gays and lesbians are enjoying unprecedented visibility, but on the other, society still relies on the gendered division of labor that renders certain subjects unequal. Drawing on an international range of examples, from Che Guevarra to “The Crying Game,” “Profit and Pleasure” leads the discussion of sexuality to a consideration of material reality and the substance of men and women’s everyday lives.

Arguing that traditional feminism is wrong to look to a natural, ‘essential’ notion of the female, or indeed of sex or gender, Butler starts by questioning the category ‘woman’ and continues in this vein with examinations of ‘the masculine’ and ‘the feminine’. Best known however, but also most often misinterpreted, is Butler’s concept of gender as a reiterated social performance rather than the expression of a prior reality.

Nancy Fraser, while agreeing with Judith Butler, diverges from the queer theorist in several important ways.

#4 Kevin Floyd, The Reification of Desire

The “Reification of Desire” makes surprising and important connections between Marxism and queer theory, and Kevin Floyd’s analyses are to be commended for their ability to move skillfully from abstract theory to the most detailed histories of socio-economic dynamics and masculine culture.

In this pathbreaking work, Jasbir K. Puar argues that configurations of sexuality, race, gender, nation, class, and ethnicity are realigning in relation to contemporary forces of securitization, counterterrorism, and nationalism. She examines how liberal politics incorporate certain queer subjects into the fold of the nation-state, through developments including the legal recognition inherent in the overturning of anti-sodomy laws and the proliferation of more mainstream representation. These incorporations have shifted many queers from their construction as figures of death (via the AIDS epidemic) to subjects tied to ideas of life and productivity (gay marriage and reproductive kinship). Puar contends, however, that this tenuous inclusion of some queer subjects depends on the production of populations of Orientalized terrorist bodies. Heteronormative ideologies that the U.S. nation-state has long relied on are now accompanied by homonormative ideologies that replicate narrow racial, class, gender, and national ideals. These “homonationalisms” are deployed to distinguish upright “properly hetero,” and now “properly homo,” U.S. patriots from perversely sexualized and racialized terrorist look-a-likes—especially Sikhs, Muslims, and Arabs—who are cordoned off for detention and deportation.

Puar combines transnational feminist and queer theory, Foucauldian biopolitics, Deleuzian philosophy, and technoscience criticism, and draws from an extraordinary range of sources, including governmental texts, legal decisions, films, television, ethnographic data, queer media, and activist organizing materials and manifestos. Looking at various cultural events and phenomena, she highlights troublesome links between terrorism and sexuality: in feminist and queer responses to the Abu Ghraib photographs, in the triumphal responses to the Supreme Court’s Lawrence decision repealing anti-sodomy laws, in the measures Sikh Americans and South Asian diasporic queers take to avoid being profiled as terrorists, and in what Puar argues is a growing Islamophobia within global queer organizing.

Queer studies highlights the importance of developing analyses that go beyond identity and representational politics. For Native studies in particular, queer theory points to the possibility of going beyond representing the voices of Native peoples, a project that can quickly become co-opted into providing Native commodities for consumption in the multicultural academic-industrial complex. The subjectless critique of queer theory can assist Native studies in critically interrogating how it could unwittingly re-create colonial hierarchies even within projects of decolonization. This critique also sheds light on how Native peoples function within the colonial imaginary—including the colonial imaginary of scholars and movements that claim to be radical. At the same time, Native studies can build on queer of color critique’s engagement with subjectless critique. In the move to go “postidentity,” queer theory often reinstantiates a white supremacist, settler colonialism by disappearing the indigenous peoples colonized in this land who become the foils for the emergence of postcolonial, postmodern, diasporic, and queer subjects. With respect to Native studies, even queer of color critique does not necessarily mark how identities are shaped by settler colonialism. Thus a conversation between Native studies and queer theory is important, because the logics of settler colonialism and decolonization must be queered in order to properly speak to the genocidal present that not only continues to disappear indigenous peoples but reinforces the structures of white supremacy, settler colonialism, and heteropatriarchy that affect all peoples.

Cohen looks at the failed features of queer political activism, as evolved from queer theory, and discusses how intersectionality is the key to not merely ushering in inclusive political activism, but forming collectives based on transformational agendas. In other words, for queer to really do the work, it must transform not just heteronormative oppression, but systemic domination that overlaps sexuality, race, gender, economic class, etc. “We must reject a queer politics which seems to ignore, in its analysis of the usefulness of traditionally named categories, the roles of identity and community as paths to survival, using shared experiences of oppression and resistance to build indigenous resources, shape consciousness, and act collectively. Instead, I would suggest that it is the multiplicity and interconnectedness of our identities which provide the most promising avenue for the destabilization and radical politicalization of these same categories” (

There is more to identity than identifying with one’s culture or standing solidly against it. José Esteban Muñoz looks at how those outside the racial and sexual mainstream negotiate majority culture—not by aligning themselves with or against exclusionary works but rather by transforming these works for their own cultural purposes. Muñoz calls this process “disidentification,” and through a study of its workings, he develops a new perspective on minority performance, survival, and activism.

Disidentifications is also something of a performance in its own right, an attempt to fashion a queer world by working on, with, and against dominant ideology. By examining the process of identification in the work of filmmakers, performance artists, ethnographers, Cuban choteo, forms of gay male mass culture (such as pornography), museums, art photography, camp and drag, and television, Muñoz persistently points to the intersecting and short-circuiting of identities and desires that result from misalignments with the cultural and ideological mainstream in contemporary urban America.

#9 Roderick Ferguson – Aberrations In Black: Toward A Queer Of Color Critique

The sociology of race relations in America typically describes an intersection of poverty, race, and economic discrimination. But what is missing from the picture—sexual difference—can be as instructive as what is present. In this ambitious work, Roderick A. Ferguson reveals how the discourses of sexuality are used to articulate theories of racial difference in the field of sociology. He shows how canonical sociology—Gunnar Myrdal, Ernest Burgess, Robert Park, Daniel Patrick Moynihan, and William Julius Wilson—has measured African Americans’s unsuitability for a liberal capitalist order in terms of their adherence to the norms of a heterosexual and patriarchal nuclear family model. In short, to the extent that African Americans’s culture and behavior deviated from those norms, they would not achieve economic and racial equality.

In this searing polemic, Lee Edelman outlines a radically uncompromising new ethics of queer theory. His main target is the all-pervasive figure of the child, which he reads as the linchpin of our universal politics of “reproductive futurism.” Edelman argues that the child, understood as innocence in need of protection, represents the possibility of the future against which the queer is positioned as the embodiment of a relentlessly narcissistic, antisocial, and future-negating drive. He boldly insists that the efficacy of queerness lies in its very willingness to embrace this refusal of the social and political order. In No Future, Edelman urges queers to abandon the stance of accommodation and accede to their status as figures for the force of a negativity that he links with irony, jouissance, and, ultimately, the death drive itself.