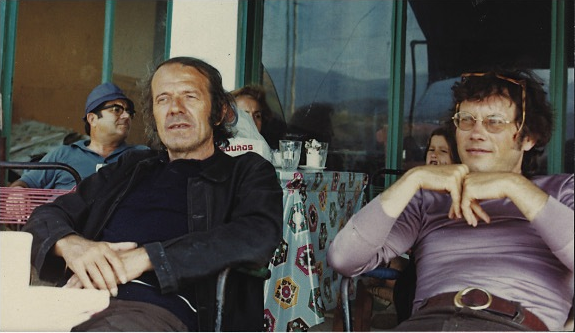 It should be no surprise that Guattari, whose work in Anti-Oedipus was anti-familial to say the least, was not a fan of family in real life. Under the mentorship of his friend Jean-Claude Polack, Guattari became an “impenitent womanizer.” The habit would last until the end of his life, a month before he died at the age of 62, he started an affair with a 26-year-old Serbian actress, whom Guattari encouraged to “have lots of lovers, but don’t leave me!”.

Tales of Guattari’s philandering  reached some of his family members in a rather unseemly way – at his funeral. Guattari’s old brother Jean was “surprised and disturbed by the enumeration of his various feminine conquest in front of his brother’s tomb”.

When any couple got together, they sent in a kamikaze within a week to break them up because love was capitalistic.

But Guattari was also married at various points in his life, and had several children to whom he was mostly absent. When he was present, he ruled over his kids with the same authoritarianism he exhibited as a leader of a worker’s brigade. He taught his eldest son Bruno to read and write at a very early age, in part by locking Bruno in a room with a pen and paper until he wrote an adequate amount in his diary.

But it was a good thing, because all of that spartan training Bruno received would come in hand when Guattari decided “fuck it” in regards to his younger children. After separating from his wife, Guattari told Bruno “I haven’t got the time, you take care of everything.” The plan’s results were less than stellar. Guattari’s daughter even had fungus growing on her head.  When Guattari claimed in public that “parents are meaningless,” he must have forgot to add “but essential to stop foreign organisms from growing on your child’s head.”

The most ironic part? Guattari freaked out when his mother died and “repeated over and over ‘I am an orphan'”.

Deleuze’s lecture’s were a hit, to say the least. Students packed his classroom and would often have to find room sitting next to Deleuze or out in the hall. Chair thievery from adjacent classrooms was an issue, so his university had to lock the classroom until Deleuze showed up.

Deleuze was known to give compelling lectures that were seemingly improvised. But they weren’t. Deleuze would spend the majority of his time preparing for his lectures. When he would show up to class with his meticulously prepared notes, he wouldn’t even look at them because he already knew them by heart. All the while, he “chain smoked straight through class.”

It wasn’t just Deleuze’s brilliance that attracted students. Because Deleuze felt that philosophy teachers were “looked upon as court jesters,” he decided to play the part. “When he felt tired, he played the musical saw for his students.”Deleuze’s over-the-top style caused one student to yell “fag!” during class, to which Deleuze responded, “Yes, and so?”

The professor who had to follow Deleuze’s performance was not so pleased with his success.

At three o’clock, when the course was over, everyone left, and the next professor, Raymond Polin, who taught in the same room, had six students. Utterly furious, he hated Deleuze.

On another occasion, Deleuze invited himself to sit in on the jury as a student defended his thesis. As you can imagine, that student was horrified to have Deleuze on the panel and was stricken with stage fright.

I suddenly got stage fright. I couldn’t think of anything to say, so I just said, “Why do I have to give a formal summary, since you’ve already read my work? Deleuze stepped in, saying, ‘Don’t worry, I’ll summarize your thesis for you.’

Deleuze and Guattari all too often get lumped together with “post-modern bullshit” that is stuck in an ivory tower and divorced from reality. The truth is that both Deleuze and Guattari were heavily involved in activism. Deleuze was one of the only members of his philosophy department that actively supported the student movements during May ’68, and Guattari set up an organization called the “Center for Initiatives for New Free Spaces” to “ensure the defense of prosecuted activists.”

Guattari, as we noted earlier, led worker’s brigades in Hungary and dug the foundation for what would become the University of Zagreb. He also was kicked out of his psychiatric clinic for, among other things, actively encouraging his patients to take part in the May ’68 protests.

In 1977, political turmoil erupted Italy that made France’s May ’68 look like child’s play. Guattari was heavily involved. Unlike May ’68, where violence was limited, Italian revolutionaries had a penchant for blowing shit up and assassinating political figures. In Bologna, radicals turned a sports arena into a forum to “discuss tactics, strategies, and the abolition of labor.” Guattari arrived on the scene and was greeted like “Jesus walking on water.”

Guattari hung out with the most radical branches of the Italian movement, causing some to complain that Guattari did not speak out against the terroristic violence happening in Italian cities. Unbeknownst to these critics, Guattari made a point to hang out with the more violent activists for the sole purpose of dissuading them from using violence.

Both Deleuze and Guattari publicly defended Italian radicals who were either on trial or being extradited to Italy from France.  One of those radicals was Antonio Negri.

Negri was a political leader who supported revolution but was not in any way linked to the Red Brigade, the revolutionary group responsible for most of the bombing and political assassinations. Still, Italian officials issued a bogus warrant for Negri’s arrest. Negri fled and took refuge in Guattari’s home. It was then that Negri began attending Deleuze’s classes. Negri recalls:

And, like any highly educated and intelligent individual, Negri began to casually visit the place where he was wanted for terrorism. He, of course, was eventually caught and jailed to face a kangaroo court that convicted him despite an overwhelming lack of evidence.

But his supporters found a loophole, they elected him to parliament which granted him parliamentary immunity from criminal charges. Realizing that it would only be a while before the Italian parliament quickly amended the error, Negri fled Italy again. Parliament voted to rescind his immunity 300-296, but not before Negri was on a boat “that was most certainly paid for by Felix,” as Negri recalls.

#10 Guattari Pissed Away French Government Research Money on, Among Other Things, Motorcycles and Abortions

Guattari was also involved in more “traditional” politics. Shortly after May ’68, the French government decided to throw money at leftist intellectuals to research  and identify areas where the government was fucking up. A research organization that Guattari founded, CERFI, was on the receiving end of a large amount of government funding. Some of these funds went to CERFI’s core group of researchers, but the rest went into funding whatever-the-fuck/who cares.:

All the leftists in Paris came with completely bogus projects. Felix supported them blindly. We bought a camera for one person, a motorcycle for another…we gave money to someone who came to us saying, ‘I need five thousand francs for an abortion tomorrow.’ ‘Send the money back to us when you can, ok, here you go.’ And they never came back.