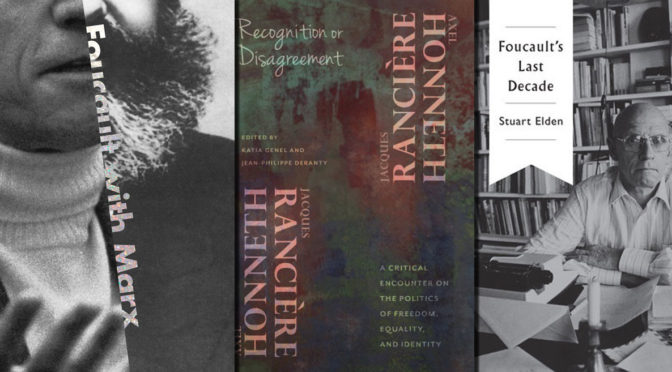 If you’re a publisher or an author with a forthcoming book, let us know at [email protected] 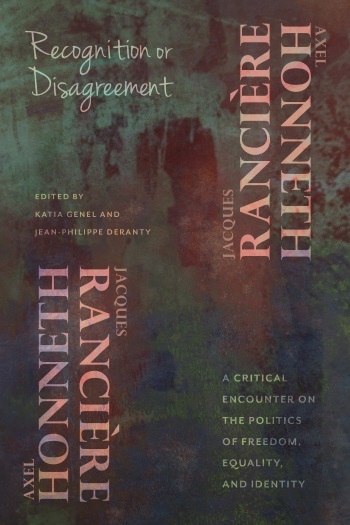 “Axel Honneth is best known for his critique of modern society centered on a concept of recognition. Jacques Rancière has advanced an influential theory of modern politics based on disagreement. Underpinning their thought is a concern for the logics of exclusion and domination that structure contemporary societies. In a rare dialogue, these two philosophers explore the affinities and tensions between their perspectives to provoke new ideas for social and political change.

Honneth sees modern society as a field in which the logic of recognition provides individuals with increasing possibilities for freedom and is a constant catalyst for transformation. Rancière sees the social as a policing order and the political as a force that must radically assert equality. Honneth claims Rancière’s conception of the political lies outside of actual historical societies and involves a problematic desire for egalitarianism. Rancière argues that Honneth’s theory of recognition relies on an overly substantial conception of identity and subjectivity. While impassioned, their exchange seeks to advance critical theory’s political project by reconciling the rift between German and French post-Marxist traditions and proposing new frameworks for justice.” 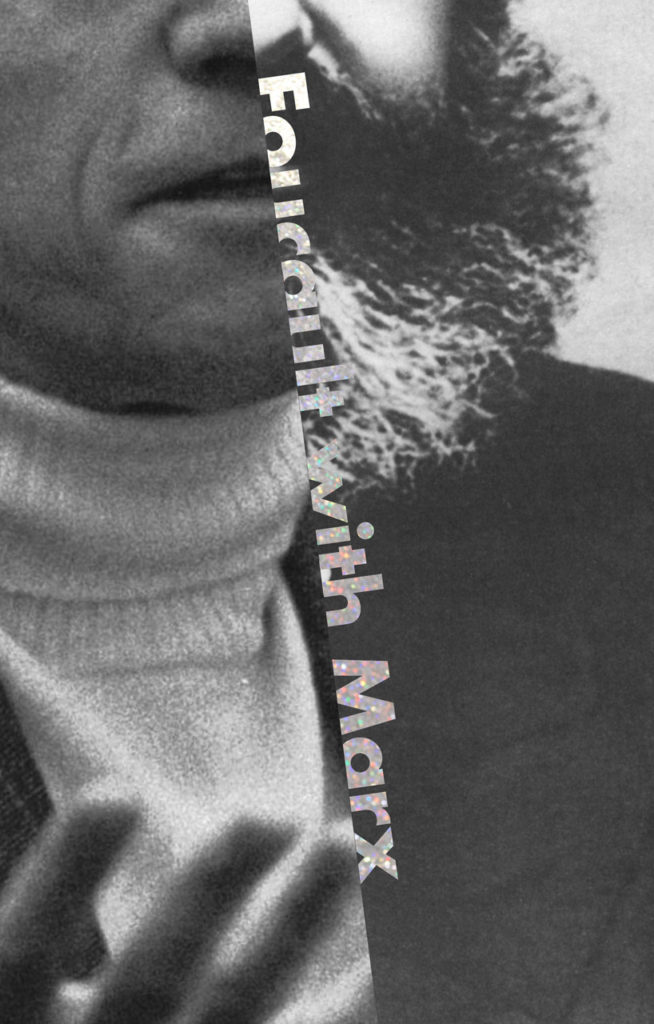 “In Foucault with Marx, Bidet investigates Marxian and Foucauldian criticisms of capitalist modernity with unprecedented detail. For Marx, the intersection between capital and the market is crucial, and property-owners make up the true ruling class. Foucault, Bidet explains, argued that organizational elements of capital are key, and therefore managers hold the dominating power and knowledge in society. Labeling these two sides of the capitalist coin as “market” and “organization,” Bidet shows how each leads to specific forms of social conflict, and he walks the reader through the catastrophic aftereffects of both.  Offering more than just a comparative theoretical analysis, Bidet unites two chief figures of critical social theory at last, and in turn, bridges the long-held separation between the old left and the new.”

What is Sexual History?

“Until the 1970s the history of sexuality was a marginalized practice. Today it is a flourishing field, increasingly integrated into the mainstream and producing innovative insights into the ways in which societies shape and are shaped by sexual values, norms, identities and desires. In this book, Jeffrey Weeks, one of the leading international scholars in the subject, sets out clearly and concisely how sexual history has developed, and its implications for our understanding of the ways we live today.

The emergence of a new wave of feminism and lesbian and gay activism in the 1970s transformed the subject, heavily influenced by new trends in social and cultural history, radical sociological insights and the impact of Michel Foucault’s work. The result was an increasing emphasis on the historical shaping of sexuality, and on the existence of many different sexual meanings and cultures on a global scale. With chapters on, amongst others, lesbian, gay and queer history, feminist sexual history, the mainstreaming of sexual history, and the globalization of sexual history, What is Sexual History? is an indispensable guide to these developments.”

“On 26 August 1974, Michel Foucault completed work on Discipline and Punish, and on that very same day began writing the first volume of The History of Sexuality. A little under ten years later, on 25 June 1984, shortly after the second and third volumes were published, he was dead.

This decade is one of the most fascinating of his career. It begins with the initiation of the sexuality project, and ends with its enforced and premature closure. Yet in 1974 he had something very different in mind for The History of Sexuality than the way things were left in 1984. Foucault originally planned a thematically organised series of six volumes, but wrote little of what he promised and published none of them. Instead over the course of the next decade he took his work in very different directions, studying, lecturing and writing about historical periods stretching back to antiquity.

This book offers a detailed intellectual history of both the abandoned thematic project and the more properly historical version left incomplete at his death. It draws on all Foucault’s writings in this period, his courses at the Collège de France and lectures elsewhere, as well as material archived in France and California to provide a comprehensive overview and synthetic account of Foucault’s last decade.”

“Peter Sloterdijk’s reputation as one of the most original thinkers of our time has grown steadily since the early 1980s. This volume of over thirty conversations and interviews spanning two decades illuminates the multiple interconnections of his life and work.

In these wide-ranging dialogues Sloterdijk gives his views on a variety of topics, from doping to doxa, design to dogma, media to mobility and the financial crisis to football. Here we encounter Sloterdijk from every angle: as he expounds his ideas on the philosophical tradition and the latest strands of contemporary thought, as he analyses the problems of our age and as he provides a new and startling perspective on everyday events. Through exaggeration, Sloterdijk draws our attention to crucial issues and controversies and makes us aware of their implications for society and the individual. Always eager to share his knowledge and erudition, he reveals himself equally at home in ancient Babylon, in the channels of the mass media and on the ethical and moral terrain of religion, education or genetic engineering.

Appealing both to the seasoned reader of Sloterdijk and to the curious newcomer, these dialogues offer fresh insight into the intellectual and political events of recent decades. They also give us glimpses of Sloterdijk’s own life story, from his early passionate love of reading and writing to his journeys in East and West, his commitment to Europe and his acceptance and enjoyment of the role of a public intellectual and philosopher in the twenty-first century. ”

What is a People? 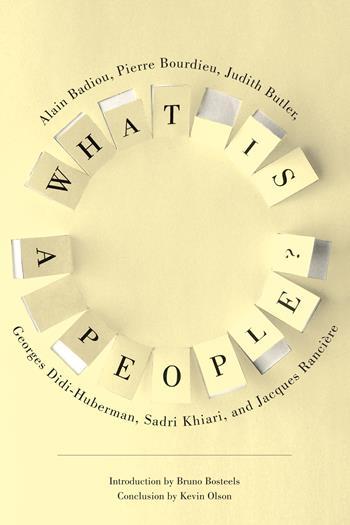 “What Is a People? seeks to reclaim “people” as an effective political concept by revisiting its uses and abuses over time. Alain Badiou surveys the idea of a people as a productive force of solidarity and emancipation and as a negative tool of categorization and suppression. Pierre Bourdieu follows with a sociolinguistic analysis of “popular” and its transformation of democracy, beliefs, songs, and even soups into phenomena with outsized importance. Judith Butler calls out those who use freedom of assembly to create an exclusionary “we,” while Georges Didi-Huberman addresses the problem of summing up a people with totalizing narratives. Sadri Khiari applies an activist’s perspective to the racial hierarchies inherent in ethnic and national categories, and Jacques Rancière comments on the futility of isolating theories of populism when, as these thinkers have shown, the idea of a “people” is too diffuse to support them. By engaging this topic linguistically, ethnically, culturally, and ontologically, the voices in this volume help separate “people” from its fraught associations to pursue more vital formulations.

Together with Democracy in What State?, in which Giorgio Agamben, Alain Badiou, Daniel Bensaid, Wendy Brown, Jean-Luc Nancy, Jacques Rancière, Kristin Ross, and Slavoj iek discuss the nature and purpose of democracy today, What Is a People? expands an essential exploration of political action and being in our time.” 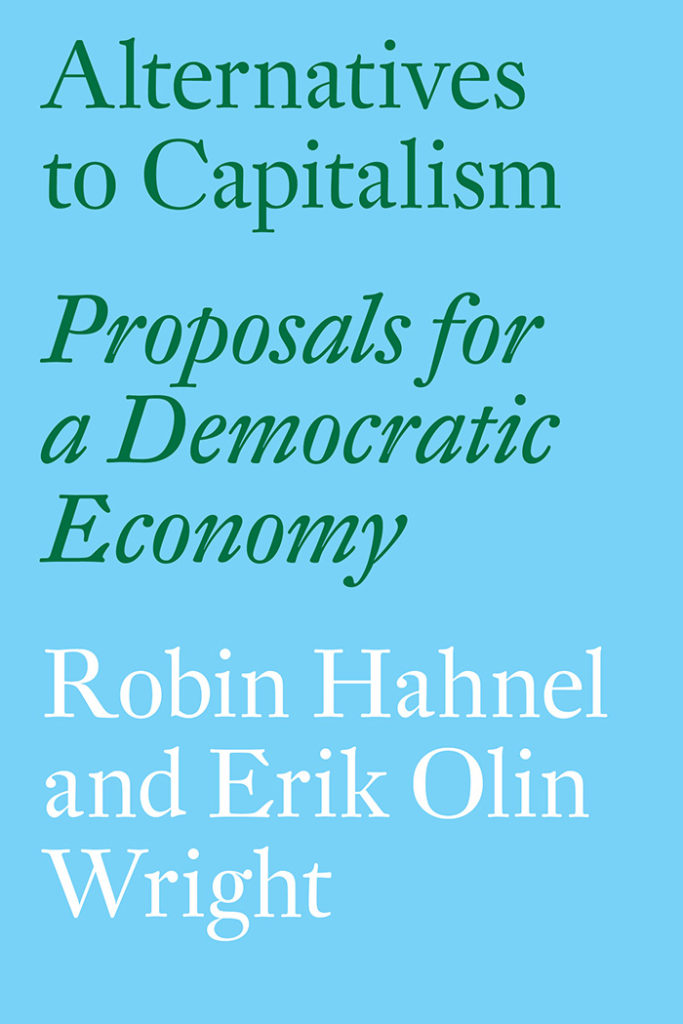 “What would a viable free and democratic society look like? Poverty, exploitation, instability, hierarchy, subordination, environmental exhaustion, radical inequalities of wealth and power—it is not difficult to list capitalism’s myriad injustices. But is there a preferable and workable alternative?

Alternatives to Capitalism: Proposals for a Democratic Economy presents a debate between two such possibilities: Robin Hahnel’s “participatory economics” and Erik Olin Wright’s “real utopian” socialism. It is a detailed and rewarding discussion that illuminates a range of issues and dilemmas of crucial importance to any serious effort to build a better world.” 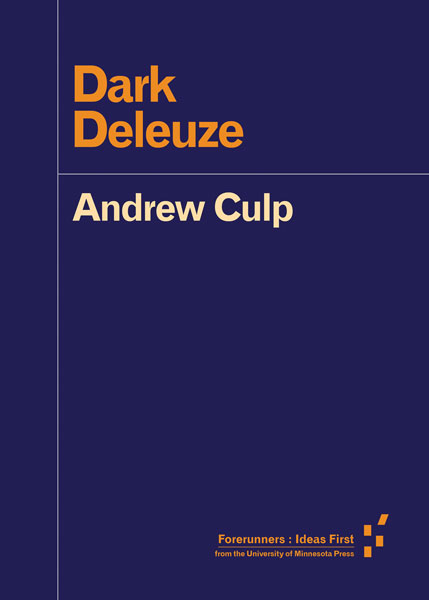 “French philosopher Gilles Deleuze is known as a thinker of creation, joyous affirmation, and rhizomatic assemblages. In this short book, Andrew Culp polemically argues that this once-radical canon of joy has lost its resistance to the present. Concepts created to defeat capitalism have been recycled into business mantras that joyously affirm “Power is vertical; potential is horizontal!”

Culp recovers the Deleuze’s forgotten negativity. He unsettles the prevailing interpretation through an underground network of references to conspiracy, cruelty, the terror of the outside, and the shame of being human. Ultimately, he rekindles opposition to what is intolerable about this world.”

“Neoliberalism has had a radical impact on how people perceive and experience gender around the world. But while the impact of this economic and social framework on gender has received significant scholarly attention in the case of women, there has been a dearth of scholarship on how it affects men’s experience and understanding of gender. Building on the work of Cornwall and Lindisfarne’s landmark textDislocating Masculinity, this collection provides a fresh perspective on gender dynamics under neoliberalism.

The subjects covered in Masculinities under Neoliberalism range from working class men in Putin’s Russia to colonial masculinities in Southern Rhodesia and from young British Muslim men to amateur footballers in Jamaica, offering a unique glimpse into the lives of men across the globe. The contributors show how neoliberalism has transformed gender relations as well as how we understand and enact masculinity. Masculinities under Neoliberalism holds important implications not only for the study of gender, but also for sociology, development, and postcolonial studies.” 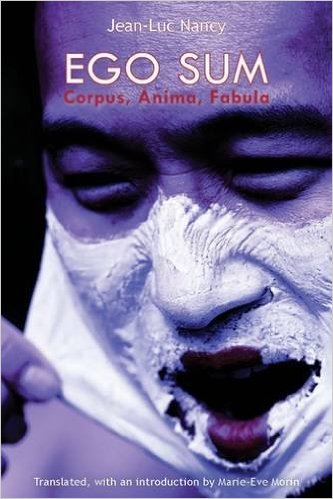 “First published in 1979 but never available in English until now, Ego Sum challenges, through a careful and unprecedented reading of Descartes’s writings, the picture of Descartes as the father of modern philosophy: the thinker who founded the edifice of knowledge on the absolute self-certainty of a Subject fully transparent to itself. While other theoretical discourses, such as psychoanalysis, have also attempted to subvert this Subject, Nancy shows how they always inadvertently reconstituted the Subject they were trying to leave behind.

Nancy’s wager is that, at the moment of modern subjectivity’s founding, a foundation that always already included all the possibilities of its own exhaustion, another thought of “the subject” is possible. By paying attention to the mode of presentation of Descartes’s subject, to the masks, portraits, feints, and fables that
populate his writings, Jean-Luc Nancy shows how Descartes’s ego is not the Subject of metaphysics but a mouth that spaces itself out and distinguishes itself.” 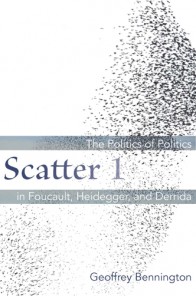 “What if political rhetoric is unavoidable, an irreducible part of politics itself? In contrast to the familiar denunciations of political horse-trading, grandstanding, and corporate manipulation from those lamenting the crisis in liberal democracy, this book argues that the “politics of politics,” usually associated with rhetoric and sophistry, is, like it or not, part of politics from the start.

Denunciations of the sorry state of current politics draw on a dogmatism and moralism that share an essentially metaphysical and Platonic ground. Failure to deconstruct that ground generates a philosophically and politically debilitating selfrighteousness that this book attempts to understand and undermine.

After a detailed analysis of Foucault’s influential late concept of parrhesia, which is shown to be both philosophically and politically insufficient, close readings of Heidegger, Kierkegaard, and Derrida trace complex relations between sophistry, rhetoric, and philosophy; truth and untruth; decision; madness and stupidity in an exploration of the possibility of developing an affirmative thinking of politics that is not mortgaged to the metaphysics of presence.

It is suggested that Heidegger’s complex accounts of truth and decision must indeed be read in close conjunction with his notorious Nazi commitments but nevertheless contain essential insights that many strident responses to those commitments ignore or repress. Those insights are here developed—via an ambitious account of Derrida’s often misunderstood interruption of teleology—into a deconstructive retrieval of the concept of dignity.

This lucid and often witty account of a crucial set of developments in twentieth-century thought prepares the way for a more general re-reading of the possibilities of political philosophy that will be undertaken in Volume 2 of this work, under the sign of an essential scatter that defines the political as such.”