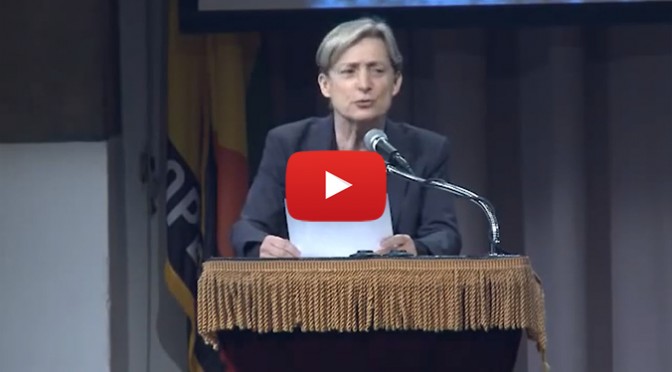 This video, featuring Judith Butler, was filmed at Cooper Union in NYC for the 2014 PEN World Voices Festival in April.

Below is a transcript, transcribed posted in the YouTube comments by user Raven Sinclair.

Speaking from rage does not always let us see how rage carries sorrow and covers it over.

So I cannot do it well. At least not this evening. How often is sorrow effectively shouted down by rage? How does it happen that sorrow can bring about the collapse of rage? Is there something to be learned about the sources of non-violence from this particular power of grief to deflate rage of its destructiveness?

Ann Carson asks “Why does tragedy exist? And then answers, because you are full of rage. Why are you full of rage? Because you are full of grief. Ask a headhunter why he cuts off human heads. He’ll say that rage impels him and rage is born of grief. The act of severing and tossing away the victim’s head enables him to throw away all of his bereavements. You may think this does not apply to you yet you recall the day your wife, driving you to your mother’s funeral, turned left instead of right at the intersection and you had to scream at her so loud, other drivers turned to look. When you tore her head off and threw it out the window, they nodded, changed gears, drove away.” End quote.

The grief is unbearable and from that unbearability one kills; a killing that produces more grief. Have we yet figured out exactly how this works, the transition from unbearable grief to uncontrollable rage and destructiveness?

Perhaps grief is imagined to end with violence as if grief itself could be killed. Can we perhaps find one of the sources of non-violence in the capacity to grieve, to stay with the unbearable loss without converting it into destruction? If we could bear our grief would be less inclined to strike back or strike out? And if the grief is unbearable is there another way to live with it that is not the same as bearing it?

We know the contours of this terrible circle; destroying to stop the unbearable grief, to bring an end to the unbearable only to then redouble that loss by destroying again. Perhaps that destructive act is a way of announcing that what is unbearable is now someone else’s problem, not mine. “Here, you take this unbearable thing. Now it belongs to you.”

But, has anyone ever stopped grieving by devastating another’s life? What is the fantasy, the conceit at work in such an act? Perhaps the wager is that this I, in destroying, suddenly becomes pure action, finally rid of passivity and injurability. Finally, that is, for a passing moment.

Or perhaps in destroying one insists that the rest of the world become mired in one’s own sense of devastation. If the world is unlivable without those whom one has lost, perhaps there emerges a despairing form of egalitarianism according to which everyone should suffer this devastation.

The destructive acts born of unbearable grief are perhaps premised on the thought that with this loss everything is already destroyed so destroying becomes a redundancy, a ratification of what has already happened.

But perhaps there is an effort to bring grief to a full stop through taking aim at the world in which such a grief is possible, rolling over into a form of destructiveness that furiously proliferates more loss, wantonly distributing the unbearable.

Of course what is unbearable is already more than what one can bear so how can there be any more of that which is already too much? This terrible form of the ineffable is loosed upon the world in that furious form of grieving known as destructiveness. We may ask, is there a satisfaction in such destruction, or indeed, a satisfaction to be found in war. Freud tells us that certain forms of destructiveness yield no pleasure, no satisfaction, but churn on in a nearly mechanical way repeating without even any final satisfaction in revenge.

So what is my plea? Do I counsel more grief? Do I think that an exponential increase in grief will produce less destructiveness in the world? No, I do not if only because grief does not submit to mathematical measures. Grief is not just about registering the reality that someone or some group or some whole population is gone or nearly gone. It’s not a straightforward process that comes to an end when a reality principle delivers its verdict. Yes, the one or ones you are grieving are definitively gone. And it does not even conclude when we find ourselves having more or less successfully incorporated a lost one into our psychic reality; our gestures, clothing, our ways of thinking, and modes of speech.

Mourning has to do with yielding to an unwanted transformation where neither the full shape and nor the full import of that alteration can be known in advance.
This transformative effect of losing always risks becoming a deformative effect. Whatever it is, it cannot be willed. It is a kind of undoing. One is hit by waves in the middle of the day, in the midst of a task. And everything stops. One falters, even falls.

What is that wave that suddenly withdraws your gravity and your forward motion? That something that takes hold of you and makes you stop takes you down?

Where does it come from? Does it have a name?

What claims us at such moments when we are most emphatically not masters of ourselves and our motion, when we lose certain people or when we are dispossessed from a place or a community. It may be that something about who we are suddenly flashes up, something that delineates the ties we have to others that shows us that we are bound to one another. And that the bonds that compose us also do strand us, leave us uncomposed.

If I lose you under the conditions in which who I am is bound up with you then I not only mourn the loss but I become inscrutable to myself, and this life unbearable. Who am I without you? I was not just over here and you over there but the I was in the crossing, there with you but also here. So I was already decentred, one might say, and that was precious and yet when we lose, we lose our ground. We are suddenly at risk of taking our own lives or the lives of others. Perhaps what I have lost on those occasions is precisely that sense that I can live without you even if it turns out that I can live without that specific you that you happened to be. Even if I was surprised to find that I survived when survival was unthinkable. If I can and do live without you, it’s only because I have not, as it were, lost the place of you; the one to whom I address myself. The generalized addressee with whom I am already bound up in language in a scene of address that is the linguistic condition of our survivability. This apostrophic you may be this you or that other one with another name, but maybe also some you I do not yet know at all, maybe even some vast set of you’s, largely nameless, who nevertheless support both my gravity and my motion. And without you, that indefinite, promiscuous, and expansive pronoun we are wrecked and we fall.

A loss might seem utterly personal, private, isolating. But it also may furnish an unexpected concept of political community, even a premonition of a source of non-violence.  If the life that is mine is not originally or finally separable from yours then the we who we are is not just a composite of you and me and all the others, but a set of relations of interdependency and passion. And these we cannot deny or destroy without refuting something fundamental about the social conditions of our living. What follows is an ethical injunction to preserve those bonds, even the wretched ones, which means precisely guarding against those forms of destructiveness that take away our lives and those of others beings, and the ecological conditions of life.

In other words before ever losing we are lost in the other, lost without the other. But we never knew it as well as we do when we do actually lose. This being inthral is one way of describing the social relations that have the power to sustain and to break us way before we enter into contracts that confirm that our relations are the result of our choice. We are already in the hands of the others; a thrilling and terrifying way to begin. We are from the start both done and undone by the other. And if we refuse this, we refuse passion, life, and loss.

The lived form of that refusal is destruction. The lived from of its affirmation, is non-violence.

Perhaps non-violence is the difficult practice of letting rage collapse into grief since then we stand the chance of knowing we are bound up with others such that who I am or who you are is this living relation that we sometimes lose.

With great speed we do sometimes drive away from the unbearable or drive precisely into its clutches, or do both at once not knowing how we move or with what consequence. It seems unbearable to be patient with unbearable loss and yet that slowness, that impediment can be the condition for showing what we value and even perhaps what steps to take to preserve what is left of what we love. Thank you.