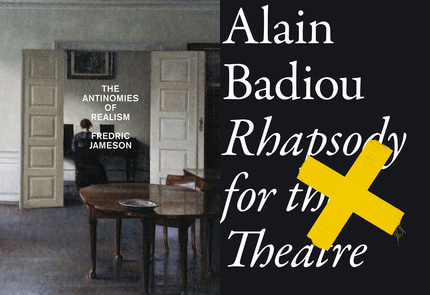 Badiou’s book, “Rhapsody For The Theatre

Fredrick Jameson’s book, “The Antinomies of Realism,” is set for release October 18, 2013. From Verso:

The Antinomies of Realism is Jameson’s major study of the nineteenth- century realist novel from a comparative perspective, covering the major literary traditions of Western Europe and the United States. It reviews the most influential theories of artistic and literary realism, and takes an approach based on the social and historical preconditions for its emergence. These combine an attention to the body and its states of feeling, as well as to the categories of individualism and temporality (or history). They are studied in a range of major authors, including Zola, Tolstoy, Pérez Galdós, and George Eliot.

The very notion of such a synthesis or symbiosis implies the approach of a moment in which its two basic impulses begin again to separate, and this explains the gradual supersession of classical realism in the novel by the various forms of what we call modernism. A coda then explains the survival of “realistic” narratives after the end of classical realism—it is in effect a proposal for the study of popular fiction and mass culture.