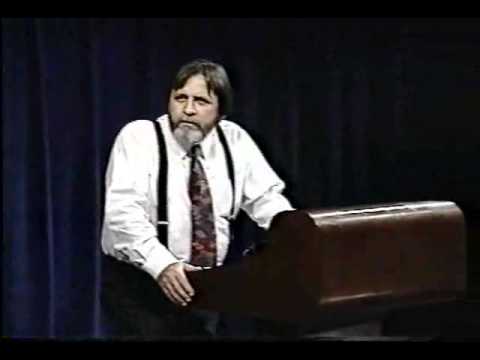 I first came across Rick Roderick’s lecture series, Self Under Siege—Philosophy in the 20th Century, at the end of a long, disillusioning study session in graduate school. YouTube’s thumbnail image of the bearded, drably attired man crouching over a rigid dais suggested a mild tedium wildly incommensurate with the actual experience of watching the video. Rather than the lucid, studied intensity and sublime hilarity Roderick enacted in his talk, I expected something dryly informative that might compensate for the unwarranted neglect of proper book-learning I had assumed. Roderick’s thick West Texas accent (he was originally from Abilene) and casual references to fast-food chains, daytime talk shows and the like proved difficult to reconcile with the fact that he was primarily talking about very dense, even abstruse critical theory—the kind that only the erudite or severely pretentious claim to meaningfully understand. Roderick, however, had an obvious gift for demystifying the most enigmatic philosophy even for a layman audience; and seemingly without having to dilute or misappropriate the discipline’s denser elaborations. This lecturing style of nuance sans pontification truly was a breath of fresh air. What puzzled me most about this was how someone performing such a feat could look like, talk like, and think like a West Texan, even to the point of seeming like a caricature. My own expectations about the cultural mold a gifted philosophical mind must fit into clearly needed some sober re-evaluation, despite what that reflection might illuminate about my pretentions and prejudices. A careful study of this treasure-trove of lectures that I mistakenly discovered in a moment of lethargy seemed to be the only way to examine these expectations and understand why someone radically folksier than me could exact much greater eloquence and efficiency of meaning.

I think Roderick’s term “self under siege” is best understood as having an elastic meaning. It refers to economic, political, and cultural forces that he sees making peace of mind and a stable sense of identity elusive. But the phrase also seems to have a performative element to it. I find Roderick most compelling when he performs as a “self under siege,” when his own sense of exasperation with the world around him becomes palpable; when he becomes less a disseminator of ideas and more a dramatic expression of ideas being lived. A sublime example of this performance comes when Roderick discusses the ubiquity of advertising in a lecture called “Sartre and the Roads to Freedom”:

Now this is funny, but in a way it’s not funny. I mean it’s, like, if Christ came back, he’d get a deal with Nike. I mean, why mess with, you know, twelve fishermen? I mean, get a deal with Nike! This is the self under siege, this is a world transformed, and believe me…believe me…well, you don’t have to believe me, I mean, hell. . .

Roderick’s incoherent sense of timing, his acute colloquialism, his gift for making hyperbole seem like an understatement: these all elevate the subject above an abstraction. He’s too incensed to avoid speaking in contradictory fragments. His low-brow cultural references, though, often do justice to complex subjects. Here is how Roderick summarizes Immanuel Kant’s Groundwork of the Metaphysics of Morals:

Always treat other people as an end, and never as a mere means. Now, my West Texas way of saying that is ‘Don’t use folks’…That means: don’t hire them at Burger King so you can make extra money as an Assistant Manager.

Is it fair to say that the West Texan translation he offers—“don’t use folks”—captures Kant’s meaning reasonably well? It’s odd to imagine Burger King as the ultimate illustrative metaphor for “categorical imperatives,” but, really, I can’t explain what makes this odd. It’s not that he’s trying to placate a laymen audience by appealing to some under-sophisticated framework of associations. Rather, Roderick genuinely seems to think that the Burger King metaphor is the most intellectual one possible; that it speaks, in some sense, to the higher dignity of philosophy.

Perhaps Roderick’s humor and his more serious points are not fully separable in the wider arc of his performance. Roderick’s humor works to insert philosophy into a cultural framework that we have been habituated to see as un-philosophical in nature. In his lecture on “Nietzsche as Myth and Mythmaker” Roderick begins:

I am a child of the sixties, so I am very familiar with the so-called “Nietzsche Effect.” And that’s the effect that Nietzsche has on adolescent young males who read him for the first time. . . and begin to name their cars “Übermensch-wagons” and begin to quote Nietzsche in order to date women who dress in black, as I am dressed today.

I try to understand why I find the image of an “Ubermensch-wagon” so amusing. The hilarity of this image must be somehow connected with the way it simultaneously does violence to some deeply ingrained cultural associations between philosophy and a certain kind of pedigree. Roderick simply takes it for granted that a Nietzsche book would rest as comfortably on the dashboard of a cherry red Mustang as it would on a bookcase in the dormitory of a liberal arts college. Such a notion embodies a venerable kind of naivety that could only result from a ponderous depth of intellect. If we begin from the premise that unlearning is the truest learning, do jokes about Ubermensch-wagons then become a vital form of praxis?

Roderick first became interested in philosophy as an undergraduate at the University of Texas at Austin, where he was heavily involved in organizing protests against the Vietnam War. In a 1987 interview, he tells his colleague, Anne Buttimer, that the origins of his interest in philosophy coincided with his discovery of a certain intellectual tradition that goes against the grain of history, or exists somewhere outside of it:

I began to see the hidden past of America; the past that was there in the thirties, that was there when I listened to Woody Guthrie, which I came to after Bob Dylan, right? And I began to see a hidden past of America. A past full of promise that had basically been taken over by a bunch of shoddy insurance salesmen and techno war bureaucrats. And I began to see and feel part of an America that’s been hidden. And it’s certainly systematically hidden at the university, in my opinion.

In “Heidegger and the Rejection of Humanism,” the first of Roderick’s lectures I encountered, he takes an unusual stance that seems to capture his ambivalent attitude toward academia. He wants to praise the university as a place where one can acquire the tools to retrieve this hidden heritage. But he also wonders to what extent the university has played a role in keeping it concealed. Perhaps this is why Roderick declares that his intended audience for Self Under Siege will be the “non-footnoting public.” “I don’t want to call them not scholarly,” he explains, “because many people read many more books than academics. Academics, when they are through with their meetings, don’t have time to read, you know, let alone teach.” This self-deprecating attempt to direct suspicion at the motives of his own profession perhaps works to disavow the intellectual authority that it so eagerly wants to endow him with.

Occasionally, Roderick’s habit of deflating the obscure works he has doubtless read and understood can go too far and begin to sound flippant. In a lecture on John-Paul Sartre, for example, Roderick jokes, “I only want to mention [Critique of Dialectical Reason] because I don’t want you to read it. And here is why: it’s too damn long and life is too short.” As with his comment on the Übermensch-wagon, Roderick seems too eager to disavow his intellectual authority. He continues:

We are in a culture where people spend time, huge amounts of time, running hither and thither to buy, you know, shorts for the kids for school, to go up and down Stairmasters and so on…So, one function that people who at least used to be intellectuals, like me, can perform is to say about certain books, “Don’t worry about it, you don’t have time for it.”

Even though his tone sometimes makes him an unlikely ambassador of the world of ideas, I have to admire how Roderick avoids reflexive veneration for the texts he lectures on. He approaches canonical philosophical texts with that alternative, non-academic “tradition full of promise” in mind, and tries to reconcile his hard-earned erudition with the specter of what it might have blinded him to. Roderick is using his authoritative status in the discipline as a tool to take us beneath the surface of a constructed existence, to try to re-discover something for us and in us that requires a flare for drama as much as for disciplined explication. Playing Virgil to our Dante means that, for him, incoherent rambling becomes the ultimate articulation, erudition the ultimate dilettantism, praise of great philosophers’ minds the greatest denigration of their spirits.

If it can be difficult to tell when Roderick is joking and when he’s serious, however, that may be because his humor sometimes intimates an underlying despair. Throughout Self Under Siege, Roderick worries that the contemporary individual’s prospects for freedom, autonomy, and happiness are steadily eroding. His idealistic attitudes toward education are balanced with a realistic—even pessimistic—assessment of how much change a teacher can ultimately affect. Toward the end of many lectures, Roderick begins to sweat a little heavier, intone his words with more bitterness, and gesticulate with more abandon. But his darker moments can turn rather quickly to something more serene. This captivating transformation of mood often happens when Roderick manages to give his audience a final, culminating point. At the end of “Heidegger and the Rejection of Humanism,” Roderick’s humor, annoyance, and dread seem to finally, irrevocably entwine:

For now, that’s all—except be sure and fear death. I mean, that’s important to being human. Fear death and realize that even if you don’t smoke, and even if you jog, you are still going to die. And that should come as a great relief to all of you.

This remark becomes more prescient when you see it on film. Roderick ends his lecture as abruptly as life itself can end. And though his sense of humor seems misplaced given the point he tries to make, humor often should seem misplaced in a world that poses continual hardship. Perhaps he turns to humor not because there’s something in essence comical to be referenced. Perhaps the humor affords us emotional distance that lets us to peer into something otherwise un-seeable, irreconcilable. The philosopher must be a performer, as Socrates well knew. Like a John Prine or Loretta Lynn ballad, then, Roderick’s lectures are most funny where they are saddest. The lightheartedness makes the tragic situation easier to bear. If his lectures seem artless and contrived to some viewers that is arguably because they succeed in reflecting the viewers’ acquired expectations.

In coming to terms with Roderick’s lectures, we have to consider his life as the ultimate criterion of his philosophy’s worth. In that sense, I am reminded of the way that he speaks of Sartre:

For him philosophy was not just an academic exercise of thinking, but the way he tried to construct a life worth living, a self worth talking about as a kind of destiny, and I am in no position to say he didn’t do a decent job at it.