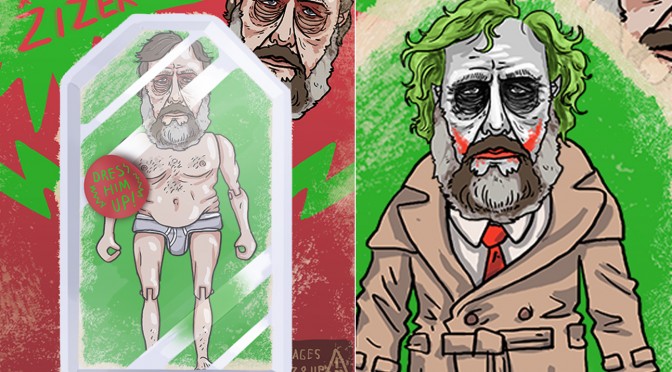 If you enjoy A) wasting your time and B) Slavoj Zizek, get ready – there’s a game that’s perfect you.

Entitled “Zizek Dress Up“, the online game allows players to customize the head, torso and legs of Slovenian theorist Slavoj Zizek, along with his accompanying background. Users are also given the option to save their monstrous creations as a .PNG file.

It started as a joke, creator Cameron Kunzelman told us via email.  “My friend @kaborso made a one-off tweet as a joke and, as I often do, I took it way more seriously than I should have,”  Kunzelman explained. “I put a call out on Twitter and [illustrator] James Wragg sent me an email. I immediately saw that he had the look and the feel of Zizek’s weirdness. So we were off and running.”

It was inspired, in part, by “Pervert’s Guide to Cinema,” where Zizek frequently assumes the appearance of popular movie characters.

It’s not Kunzelman’s first foray into game-making. They’ve made games like  “Oh No,” which features a menacing Michel Foucault head chasing you around, “Smash the Patriarchy” and the strange “Slavoj Zizek Makes a Twine” which was allegedly commissioned by The Atlantic’s Ian Bogost.

You can find all of Kunzelman’s game’s on Hey Look At My Games.