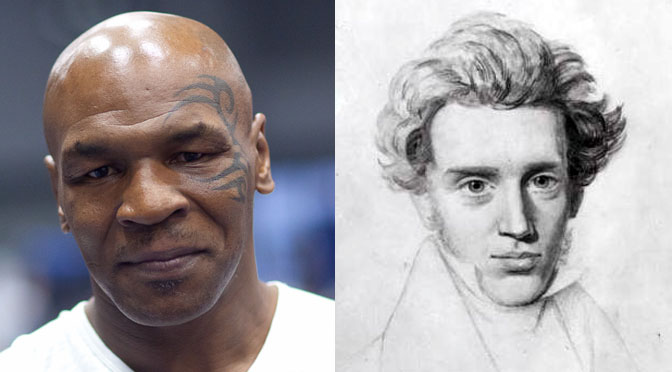 Former heavyweight boxing champion Mike Tyson is really into philosophy, apparently. Back in December, Tyson took to the pages of the Wall Street Journal to espouse his love for the work of Soren Kierkegaard and Friedrich Nietzsche.

I’m currently reading “The Quotable Kierkegaard,” edited by Gordon Marino, a collection of awesome quotes from that great Danish philosopher. (He wanted his epitaph to read: “In yet a little while / I shall have won; / Then the whole fight / Will all at once be done.”) I love reading philosophy.

“Does he dog-ear the pages so he can bite them off later?,” one commenter asked.

Soren Kierkegaard was a Danish philosopher who influenced many of France’s post-WW II existential thinkers, including Albert Camus. He also  published under a series of ridiculous pseudonyms: Johannes DE SILENTIO, Anti-Climacus, Hilarius Bookbinder, and Constantin Constantius.

Tyson, who converted to Islam in prison after a 1992 rape conviction, also loves reading Nietzsche, the German philosopher who famously proclaimed “God is dead.”

Most philosophers are so politically incorrect—challenging the status quo, even challenging God. Nietzsche’s my favorite. He’s just insane. You have to have an IQ of at least 300 to truly understand him.

Perhaps Mike Tyson should read Derrida’s work on eating the other. Or, given his penchant for political incorrectness, Slavoj Zizek.