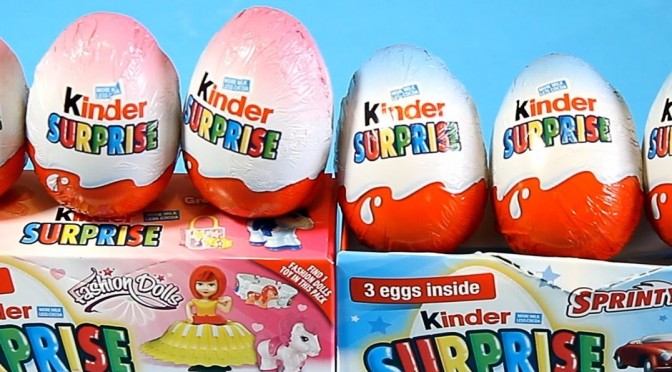 ‘We do not advocate or promote our products as gender specific.’ This was how the Kinder Surprise brand addressed complaints about their new range, where the usual chocolate eggshell containing a plastic toy comes with a new pink or blue-tinted wrapper. So, this Easter, children can look forward to ‘limited edition’ superheroes, cars, etc. in the blue eggs and princesses, dolls and ponies in the pink ones. Of course, no gendering intended: as the company’s statement goes on to explain, the new coloured eggs are merely to ‘help parents navigate the toy ranges on offer and make purchasing decisions based on what is most relevant for their child.’ Why does a popular product aimed at young children move its marketing strategy away from unisex and towards crass gender stereotypes via a multi-million pound campaign, whilst having to publicly deny that this is the case to save face?

Children’s culture is becoming increasingly gendered. Where, up to the late nineteenth century, young children wore the same sack-like dresses, and up to at least the mid-1980s, girls and boys were assembling towers out of primary coloured blocks in the same dungarees, today even newborn babies within reach of globalised consumer culture tend to come in colour-coded nappies. There is an increasingly conspicuous discrepancy now between the triumphalist embrace of a discourse of equality of the sexes in the urban west, and the gender ideals on sale. Pink and blue for children conjure the traditional gendered binaries; active/passive, essential/supplementary, pragmatic/decorative; and Kinder Surprise’s adverts sum up a whole market when they pitch ‘cars to fuel the imagination’ vs. a ‘range of ponies, accessories, locks, bracelets, and dolls for creative play’.

But why do we say one thing and buy another? Brands are quick to excuse themselves via their customers’ desires: ‘this is what the research says people want’, and via narratives of choice: ‘we’re not the ones who decide whether a child gets a pink or a blue egg – you, the parents, do. We are simply helping you navigate your purchasing decisions’. If the Pink and Blue Kinder chocolate eggs stand out, it’s only because of the amusing inconsistencies of its promises: it’s supposed to be a surprise – except one that now requires awkward gender-based pre-sorting. Surprise is the point but apparently no longer what we ‘want’.

Even before pink and blue, there has been something paradigmatic about Kinder Surprise. Cultural theorist Slavoj Žižek, with reference to psychoanalyst Jacques Lacan, points out how the chocolate eggs demonstrate our desire for something beyond the thing we want: the hollow chocolate shell is discarded for another shell, with a toy inside, thus revealing the mechanism by which we replace one object of desire with another without ever arriving at the thing itself, the ultimate fulfilment of desire. In this way, a basic structure of desire is harnessed by the commodity: Kinder Surprise offers the ‘something more’ (toy) beyond the initial object purchased but neglected for it (chocolate); but it is an addition for its own sake: mostly, the experience ends up dominated by the structural void between the two. So, Žižek claims, Kinder Surprise make money on desire itself, without selling much of an object, and comes dangerously close to displaying ‘too openly the inherent structure of a commodity itself’. Pure consumerism then, without any claim to use-value beyond a temporary excitation of desire. 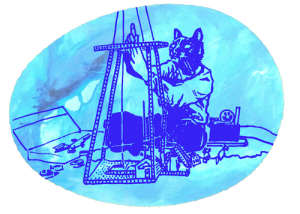 The important point is that Žižek renders the eggs not as paradigmatic of some atemporal, eternal desire, but desire under post-industrial capitalism. Perhaps the Pink and Blue eggs draw attention to themselves because they display another structural arrangement too openly: that the void in the egg is also the void to be filled with some narrative. Our desires aren’t our own, and this couldn’t be more evident in the case of the three+-year-old consumers of Kinder Surprise, who so obviously did not know they were to want either pink ponies or blue cars (rather than everything in the world, in all its polymorphous perversity) until they were told. But there is no ideology here in the traditional sense, no overarching system of ideals as the basis of a political and economic system. And this is already beginning to be true in the early twentieth century, when big American department stores decided to promote pink for girls and blue for boys in order to increase their profits: if the average family has a boy and a girl, convincing parents to buy gender-specific clothing will mean fewer hand-me-downs, and more clothes sold. One explanation, then, is that pink and blue dominates today not because we believe in biological differences more than the Victorians, but because the most dominant narratives are decided by profit imperatives, not by conspiracies of sexists. Gender-specific paraphernalia means more stuff gets bought, and now the pink and blue culture is so pervasive even a tiny unisex surprise toy has become unattractive. This is not enough to explain this strange and growing culture of pink and blue – but it raises the distinct and uncomfortable idea that children’s ideas of themselves as boys or girls are largely dictated by profit motives. Somehow the old devil patriarchy made for a better enemy. Kinder Surprise makers aren’t patriarchs, they are players in post-industrial capitalism. But they are part of a culture, and a market, that sells crude, binary gender ideals that will have effects on the shape of our desires.

The art in this article was drawn for Everyday Analysis by Isabela Fawn (@IsabelaFawn) see more of her work here.