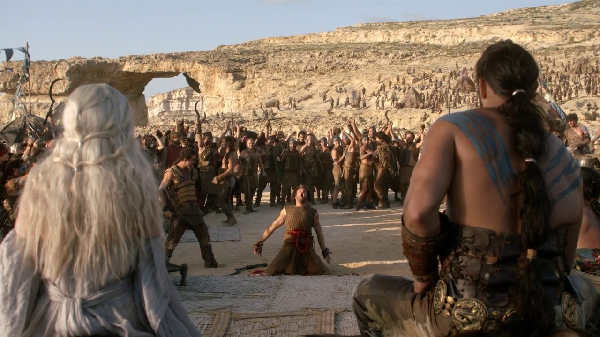 about white people fighting other white people to become king, or something. Also, snow zombies. But a story about a bunch of warring white people whose way of life is threatened by scary northern immigrant zombies isn’t necessarily racist. After all, that girl with the dragons is going around freeing all the slaves. That’s sort of radical, right?

Nope. As Aamer Rahman on i09 argues, Game of Thrones and the whole “white woman goes around freeing slaves” subplot is just the super-racist imagination of American neocons like Karl Rove. Drawing on orientalist tropes of the Middle East and “noble savages,” the whole thing is kind of fucked.

It starts with the use of the Orientalist trope of a “noble savage.” You see, the white dragon lady marries into a tribe of nomadic warriors. Their hobbies include raping, pillaging, and killing people at weddings.

But when they’re not raping and pillaging, they stick to all of that warrior code business.  Did I mention they live in a desert and look vaguely Arab? It’s nothing new in Hollywood. The whole noble warrior/noble savage thing is everywhere, especially in Star Trek.

The Klingons are the Dothraki of Star Trek — the scary, warmongering Other from the Heart of Darkness out in deep space. The great thing about imaginary black and brown people is that white sci-fi/ fantasy writers can project their repressed oriental fetishes onto a blank canvas without taking responsibility – “WHAT DO YOU MEAN IT’S RACIST, THERE’S NO SUCH THING AS KLINGONS OR DOTHRAKI! How can we be racist towards people WHO DON’T EVEN EXIST??” Funny how it’s always real black and brown people who have to play the role of the imaginary ‘non-existent’ warrior/tribal/primitive/race. (With the exception of the original Star Trek, which had white actors in blackface as Klingons.)

But it’s fine, because white dragon lady, like Carrie in Sex and the City 2, is going to bring civility to these barbarians.

It begins with taming the savage Drogo who rapes her “like a hound takes a bitch,” on their wedding night (and every night after that) – until she teaches him the tenderness of looking him in the eyes when they sleep together. Then, the reforming of Dothraki customs: Dany prevents the rape of female prisoners and even gets Drogo to back her against the wishes of his riders. Finally, she establishes herself as a leader when she gives birth to her dragons (at this point the brown people literally prostrate themselves to her).

Well that sounds cool. I mean, raping female prisoners is pretty bad.  Except a very similar pretext has been used to invade Iraq and Afghanistan to save women from their evil, misogynist husbands. Additionally, the pretext gets a little fuzzy when you start to think about proliferation of rape culture among America’s bros and the fact that most of America is still really shitty to trans people. So who’s going to invade American to save them? The whole thing, according to Rahman, is just a Bush family revery.

Barbarian cultures who don’t know how to treat women bowing in the face of superior technology and military arsenal (Dragons are basically the advanced fighter jets of the GOT universe) – does this feel familiar? She then goes from city to city freeing slaves who dutifully join her quest. Dany’s story is, at its heart, a neocon wet dream. She is Laura Bush, advocating for the invasion of Iraq under the pretext of saving its women who are desperate to live a life like hers.

But Rahman is wrong, sort of. It’s not just a neocon wetdream to justify invasion. It’s a particularly virulent strain of orientalism that is deeply embedded in the white liberal imaginary. Jasbir Puar even wrote a whole book about how this idea of “sexual exceptionalism,” where we believe to be the super-best at treating women and gays, justifies the bombing of brown people while conservatives and liberals alike gleefully look on. Puar argues:

That gay and lesbian rights discourses can risk slipping into Islamophobic and racist discourses that in many ways propagate or support racist agendas is not really news. Nor is it without historical precedent. Liberal feminism has long been accused of needing the oppression of the native woman in order to achieve its own libratory trajectory. “How well do you treat your women?” became a key measure of the ability of a colonised or developing country to self-govern. While “the Woman Question” has hardly disappeared, we can now find its amendment in “the Homosexual Question”, or “How well do you treat your homosexuals?”, as a current paradigm through which nations, populations and cultures are evaluated in terms of their ability to conform to a universalised notion of civilisation.Rescue fantasies and projections about endangered homosexuality “elsewhere” are aspects of liberal gay rights frames, functioning in order to support the predominance of gay and lesbian proper subjects “here”.