Here’s a story of encouragement for budding cultural critics: if you sell out, you can make millions of dollars by re-purposing your academic work for capitalist consumption. At least, that’s what BuzzFeed founder Jonah Peretti has done.

Back in April, 2013, we discovered that Peretti published an article in college that critiqued cultural capitalism and the MTV generation by citing the work of Gilles Deleuze, Fredric Jameson and queer theory.

is inextricably linked to the

the acceleration of capitalism necessitates

an increase in the rate

at which individuals assume and

shed identities. The internet is

one of many late capitalist

phenomena that allow for more

The piece, entitled “Capitalism and Schizophrenia,” later notes that the “rapid fire succession of

signifiers” erodes a sense of temporal continuity, before going on to argue that advertisement “must

provoke an ego formation that

makes the product integral to

While Peretti was writing then, in the 1990s, about MTV, it might as well have been about BuzzFeed. The viral site which employs GIFs, listicles and quizzes to rope in readers boasted 130 million unique readers last November.

Journalist Dylan Matthews reached out to Peretti after having also discovered the academic treatise. His answer was as amusing as it was evasive. 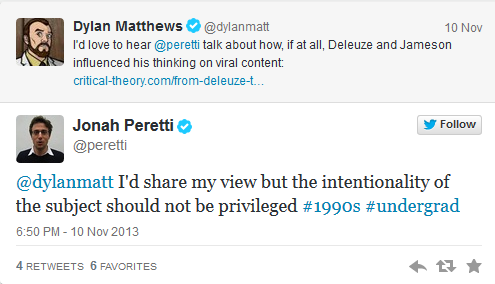 Peretti, it seems, has also read up on Barthes.

Matthews, writing for Vox, also argues that Marxist theory seems to be heavily entangled with the Buzzfeed model.

“Capitalism, Peretti concluded, needs to be constantly producing identities for peoples if the system is to survive,” Matthews writes. “And ten years later, he built a factory to fill that precise need.

Matthews later reached out to Peretti to ask if he felt that Buzzfeed embodies the principles outlined in Peretti’s “Capitalism and Schizophrenia.” Peretti simply responded “lol.”

It will be interesting to see how the conservative blogosphere will react. Will BuzzFeed join the ranks of Harry Potter and Hollywood as part of the larger liberal conspiracy to destroy America?

Or, enjoy this real quote from Peretti’s article super-imposed on grumpy cat. 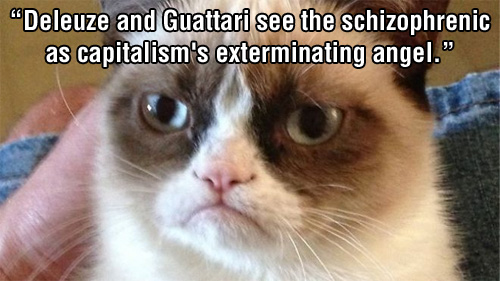