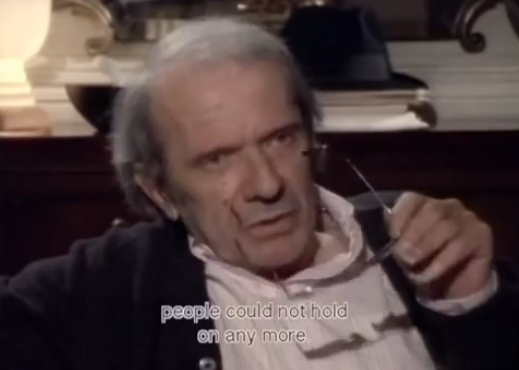 In this video from “Gilles Deleuze from A to Z,” Deleuze explains his theory of resistance. For Deleuze, when one creates, one resists. He goes on to speak about the creation of concepts in art and the centrality of Primo Levi’s concept of “the shame of being a man.” Levi was a prisoner in Auschwitz andwrote extensively about his experience during the Holocaust.

The “shame of being a man,” Deleuze argues, drives art that liberates life that has otherwise been imprisoned. “If one doesn’t feel shame, there is no reason to create art.”

But Levi’s phrase, according to Deleuze, is often misinterpreted.

“It does not mean we are all assassins, that we are all guilty… of Nazism. Levi says it admirably: It doesn’t mean the executioners and the victims are all the same… There are a lot of people who maintain, ‘Oh yes, we are all guilty’… No, nothing of the sort. We cannot confuse the executioners with the victim. So the ‘shame of being a man’ does not mean we are all the same…The ‘shame of being a man’ means at once ‘how could men do that’ – some men, that is, other than me – how could they do that? And second, how have I myself nonetheless taken sides? I didn’t become an executioner, but I still took sides to have survived, and there is a certain shame in having survived.”

Deleuze than goes on to establish the centrality of philosophy, in a surprisingly Platonic fashion. The importance of art, for him, cannot be measured. But it should always be asked: “Without art, what would the vulgarity of the people be?” So, for Deleuze, the slogan “to create is to resist” is an effective one. Philosophy, he argues, is constantly combating “stupidity.””Philosophy’s mere existence prevents people from being as stupid and beastly as they would be without it.”

He goes on to say the philosophy may not die of natural causes, but only be assassinated. He added that”today advertising presents itself as philosophy’s true rival, since they tell us ‘we advertisers are creating concepts.'”