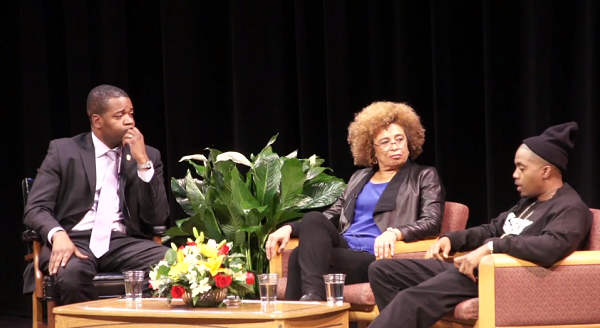 In this video, activist Angela Davis and musician Nas talk with Dr. James Peterson as part of Lehigh University’s event: “The Incarcerated Justice Series: Civil Rights in the 21st Century.”

Nas discusses his upbringing in Crown Heights, Brooklyn, and the way drugs and police surveillance effected his community and personal development.  Davis talks about her work in prison abolition, recollecting her then disbelief that over 200,00 people were in prison in the US when she was imprisoned in the 1970s. Today, the US prison population exceeds 2 million.

Davis also cites W.E.B. Du Bois, who suggested that new democratic institutions should be created to incorporate former slaves outside of the prevailing democratic systems. “Of course, that never happened,” Davis notes, “we’re dealing with the consequences of that today.”