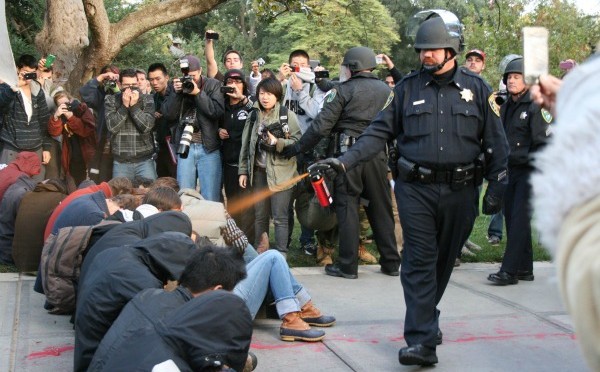 Clemson University’s Todd May recently took to the New York Times’ Opinionator section to lay out his thoughts on our violent culture and the path towards a nonviolent politics.

May has written extensively on Gilles Deleuze, Jacques Ranciere and post-structural anarchism. His books include Gilles Deleuze: An Introduction

and The Political Thought of Jacques Ranciere: Creating Equality

(which is awesome, by the way).

In the essay, May attributes our violent culture to competitive individualism, our cultural insecurity in the face of Vietnam and Iraq and the social erosion caused by neoliberalism.

May argues that while nonviolence will not magically stop the global campaign to drop bombs on people of color, he advocates a humanistic politics that stresses that the cop in riot armor beating you is a person too.

We must understand first that nonviolence is not passivity.  It is instead creative activity.  That activity takes place within particular limits.  To put the point a bit simply, those limits are the recognition of others as fellow human beings, even when they are our adversaries.  That recognition does not require that we acquiesce to the demands of others when we disagree.  Rather, it requires that our action, even when it coerces the other (as boycotts, strikes, sit-ins and human blockades often do), does not aim to destroy that other in his or her humanity.  It requires that we recognize others as fellow human beings, even when they are on the other side of the barricades.

…To recognize someone’s humanity is, in perhaps the most important way, to recognize him or her as an equal. Each of us, nonviolence teaches, carries our humanity within us.  That humanity cannot always be appealed to.  In some cases, as with the tragedy at Sandy Hook, it can even become nearly irrelevant.  However, in all but the most extreme cases nonviolence summons us to recognize that humanity even when it cannot serve as the basis for negotiation or resolution.  It demands that we who act do so with a firm gaze upon the face of the other.  It demands the acknowledgment that we are all fragile beings, nexuses of hope and fear, children of some mother and perhaps parents to others:  that is, no more and no less than fellow human beings in a world fraught with imponderables.