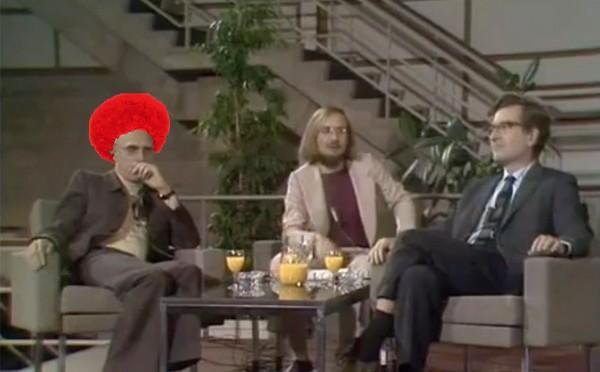 For Chomsky, human nature is rooted in universal grammar, and his belief that humans are “hard-wired” to learn language. Foucault argued, as he always has, that universal human nature is a crock of shit. But many fans don’t know of the behind-the-scenes shenanigans before and during the debate. Namely, that Foucault was paid in hash and harassed to wear a wig during the debate.

James Miller notes in “The Passion of Michel Foucault

,” the anarchist Dutch host, Fons Elders, wanted to jazz things up a bit. So, aside from offering Foucault hashish for part of his payment, Elder tried repeatedly to get Foucault to wear a bright red wig while debating Chomsky. Throughout the debate “Elders kept poking Foucault under the table, pointing to the red wig on his lap, and whispering, ‘put it on, put it on.'” Foucault ignored him, robbing posterity of the memory, and the Foucault-Chomsky debate remains wig-less.

As for the “large chunk of hashish,” that he received as partial payment, Foucault brought it back home where he and “his Parisian friends would jokingly refer to [it] as ‘Chomsky Hash.'”

Chomsky has since been a vocal critic of Foucault. In one instance, in a 2011  Q&A  Chomsky attacked Foucault’s work on “regimes of truth” and argued that Foucault “wildly exaggerates.”

His impression of the 1971 debate isn’t much better, Miller notes. “He struck my as completely amoral,” said Chomsky. “I’d never met anyone who was so totally amoral.”