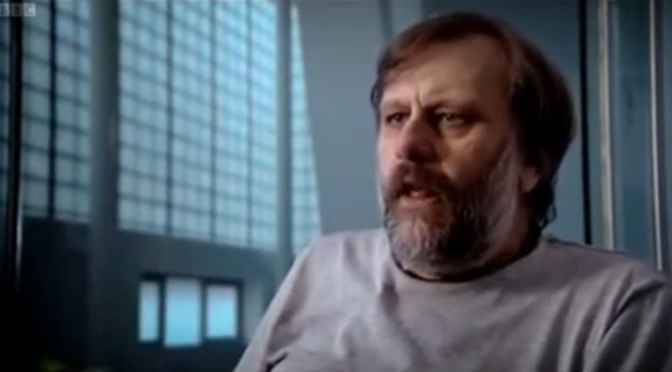 Slovenian theorist Slavoj Zizek has gotten in trouble before for being a cheerleader for revolutionary terrorism. In the clip below, Zizek praises the revolutionary violence of the Robespierre and argues that true revolutionary must will be willing to become victim to revolutionary terror. Zizek conflates the fear of violence with a certain liberal complacency, and uses his oft-repeated phrase about liberals: They want coffee without caffeine, chocolate without sugar, etc.

Zizek has recently tried to pull a sleight of hand by stressing that “violence means other stuff too.” In his response to critics, Zizek notes that the actions of Ghandi were far more violent than Stalin because they were more disruptive to the status quo. While this can certainly be a valid interpretation of violence, this video also seems to verify that Zizek is cool with straight-up murdering people in the name of revolution.

Saul Newman noted in his book “The Politics of Post-Anarchism”:

One finds a similar, indeed, even more explicit, admiration of terroristic politics in Žižek. For Žižek, the only way to institutionalise a democratic insurrection is through revolutionary terror. Once again, terror becomes a sign of revolutionary authenticity for Žižek; violence is a signifier for a kind of ethics of the revolutionary act, of the commitment to ‘go to the end’ as he puts it, and to consolidate the revolution through a brutal suppression of its opponents.Thus, once again, Lenin, Mao and Robespierre become hallowed names for Žižek, invoked against his perennial targets the ‘liberals’, who want a ‘revolution without a revolution’, in other words a revolution without its violent consequences.

…The violence that is wielded by a revolutionary elite to consolidate power – as was the case in all the forms of Terror venerated by Žižek and Badiou, from the Jacobins to Lenin and Mao – has nothing redemptive about it; it cannot serve as a tool of liberation, and only ends up consolidating the most counterrevolutionary element of all, the state itself….We should reject as outmoded the Jacobin paradigm for radical politics proposed by Žižek and Badiou. Instead, we should assert an anarchist politics and ethics against all forms of state violence; indeed, anarchism is, in my view, the only form of radical politics capable of avoiding the Terror.

The clip above is from a 2009 BBC program titled “Terror! Robespierre and the French Revolution.”