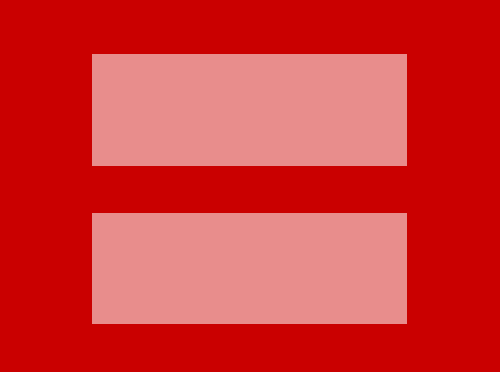 Remember that time enough people changed their profile pictures to sway the Supreme Court’s staunchest conservatives on key issues of the day? Well, it’s not just the absurdity of this political simulation you should be worried about. Caryn Riswold recently tackled the overt racism of the Human Rights Campaign’s push for marriage equality in a column on Patheos.com.

Seeing your feed overtaken by a homogenous sea of red profile icons is already a creepy metaphor for the homogeneity and assimilation of mainstream white gay culture. But add in some transphobia with a dash of homonationalism, and you’ve got a pretty shitty movement.

Riswold dicusses confluence of the HRC and homonationalism. Homonationalism is an idea put forth by Jasbir Puar in the book Terrorist Assemblages: Homonationalism in Queer Times. In short, it’s the integration of gay folk into a nationalist ideology that wants to go around bombing brown people and incarcerating black people. This  problem arises when gays and lesbians take up the cry “we’re just like you!” as Riswold argues. “Just like you” easily becomes “We’re racist like you, we’re bourgeois like you, we can act and pretend to be you.”

One can contrast this with the political chant, “We’re here, we’re queer, get used to it”, which Samuel Chambers has explained is a nice welling of telling neoliberalism to fuck off.

But I actually feel sad and more than a little angry. Okay, a lot angry. Folks, the HRC is an organization run by rich white men. They have consistently chosen not to support trans rights. They have consistently silenced POC organizations and organizers. They have accepted donations from, and even honored, multi-billionaire corporations who have done more than their fair share to contribute to the unequal distribution of wealth and to systematic racialized and gendered oppression in the US. Their vision of “equality”—as obviously signaled by their logo—is not, and never has been, equality for all. It is equality for those who can afford it. It’s equality for those who can prove they are “just like everyone else,” who respect and embody gender normativity, middle class sensibility, and white supremacy. It’s equality for those who don’t care about coalitional politics, and who endorse both trickle down economics and trickle down civil rights.

So when I see a cascade of HRC logos as far as I can see, and then a ton of self-congratulatory back-patting on the internet, like way to go, internet America!  You’ve seen the light!  You’re finally making progress!  I think about all the queer people of color, and the trans and genderqueer people, who are being told in no uncertain terms: your rights mean less than ours. Your alienation means less than our visibility. We’ll come back for you later. Wait your turn. Which, hmm, sounds like the same song that’s been sung ever since the HRC, and organizations like the HRC, essentially co-opted the possibility of a radical queer social movement and turned it into a mainstream machine for maintaining the status quo.

You can read the full Riswold article here.