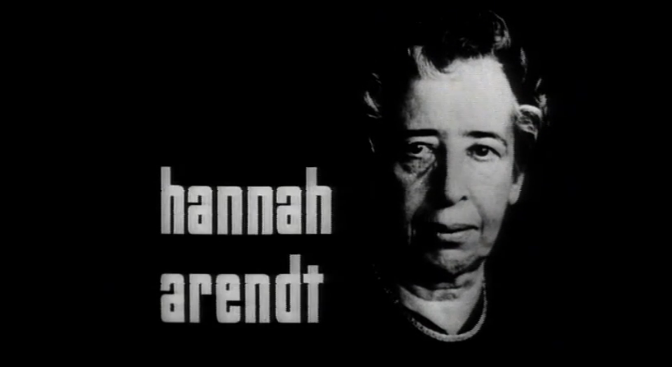 In this interview with English subtitles, political theorist Hannah Arendt discusses her role as a woman in academia, philosophy, politics and more.

Arendt, author of “The Origins of Totalitarianism,” is described by the interviewer as “a lady with a profession some might consider a masculine one…a philosopher.” Arendt replies, and is not pleased.

“I’m afraid I have to protest. I don’t belong to the circle of philosophers,” she argues. “My profession, if one can speak of it all, is political theory. I neither feel like a philosopher, nor do I believe I’ve been accepted  in the circle of philosophers.” Arendt continues to divorce herself from the philosophical tradition. Arendt, who studied philosophy with Martin Heidegger, is insistent that her work be called “political theory” rather than “political philosophy.” “I’ve said goodbye to philosophy once and for all,” she continues. “As you know, I studied philosophy. But that doesn’t mean I stayed with it.” Arendt tells the interviewer that she seeks to “look at politics with an eye unclouded by philosophy.”

You ask about the effect my work has on others. If I may speak ironically, that’s a masculine question. Men always want to be influential. I see that somewhat as an onlooker. Do I see myself as influential? No, I want to understand. If others understand in the same way I’ve understood that gives me a sense of satisfaction, like being among equals.

Arendt also discusses her emigration from Germany in 1933. Arendt, who was not particularly political at the time, decided that to be a bystander was not acceptable after the burning of the Reichstag. She tried to help a Zionist group (though she did not agree with them politically) release a collection of anti-Semitic comments made by public figures and organizations to spread global awareness about the ongoing persecution of Jews. She was discovered and imprisoned for 8 days.  “I was very lucky,” Arendt notes, “I made friends with the officer who arrested me. A charming person.” Arendt was promised by the officer that he would help get her out. After the Zionist organization had hired a lawyer, she dismissed the attorney at the recommendation of the officer. “I thought I’d be better off trusting him.”

[Via Continental Philosophy Bulletin Board]