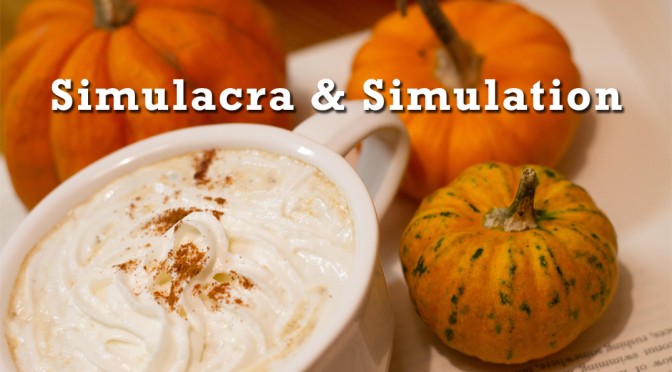 Pumpkin spice also offers the perfect opportunity to understand Jean Baudrillard, the thinker of simulation and inventor of the Matrix.

But first, some history.

Pumpkin spice lattes are the demon spawn of Starbucks, who concocted the beverage about 11 years ago.  As of last year, the company had sold more than 200 million. Now, pumpkin and pumped-spiced themed items grace our shelves in the form of beers, cookies and other delectables. Starbucks even began peddling pumpkin sauce and US pumpkin-flavored sales amounted to $308 million in 2013, up from $290 million in 2012,  Vox.com writes.

We live in a world where our globalized and industrialized agricultural system has erased seasons. Back in the day you were stuck with what was seasonal – you ate tomatoes and watermelon when it was summer, and when old man winter rolled in, you were stuck with nature’s shit bag – like potatoes and kale – a vegetable god intended you to hate and smite you with.

The fact is, we can get pumpkin year-round if we really tried, especially canned. And the culinary smut Starbucks peddles certainly isn’t looking for the local and organic variety of pumpkin. And that’s where Baudrillard comes in.

For Baudrillard, the world isn’t dictated by reality, but simulation and simulacra.

Simulation is different than a simple representation. A representation is our way of communicating and abstracting a “real” entity. So, our word “pumpkin,” or an image of one, represent the real thing that is a pumpkin. Simulation, on the other hand, is the negation of the “real” pumpkin. A simulacrum doesn’t cash in it’s value for the real thing, it only seeks to be exchanged with other simulacra and itself. It’s where semiotics meets capitalist commodity fetishism.

For Baudrillard, simulation can be thought of like a timeline from representation to simulation in 4 steps, as he notes in his book “Simulacra and Simulation.”

The fact that we welcome the return of pumpkin season, save for those who demand they buy these pumpkins from an ethically sourced gluten free farm just masks the fact that there are no seasons. We could probably ship pumpkins from all around the world to get our pumpkin fix year-round. But even then, it’s only the third order of that list above. It’s not quite at that next level pure simulacra shit.

Did I mention that there’s no pumpkin in your pumpkin spice latte? It’s nutmeg (and a few other spices). In other words, that delicious sip of fall you just imbibed is actually a pure simulacrum, of that fourth order. Pumpkin spice doesn’t conceal the fact that there are no longer seasons, pumpkin spice has no referent in reality, it exists for its own sake. The only thing “pumpkin spice”refers to is itself– like the distinct difference between “cherry flavored” items and “red flavored” candy that claims to be cherry-flavored.

Those who bake will quickly note that “pumpkin spice” derives from the mixtures of spices (nutmeg, allspice, etc) that go into a pumpkin pie. But that’s exactly the point: it doesn’t matter whether “pumpkin spice” actually has any correlation to reality. Ads for pumpkin spice items tout pumpkins and other fall fare, as if there’s a biological imperative to shove “things that go well with pumpkin” into our collectively fat faces when the leaves start to turn. Nutmeg and allspice are also available year-round, as is canned pumpkin, meaning we could clearly sate our desires at any time. Not to mention those ignorant consumers, like myself, who figured “pumpkin spice” was just a magical extraction of pumpkin essence gracing my caffeinated beverage.

Pumpkin spice lattes are just a synecdoche for larger world of simulation. For Baudrillard, the relation of politics to reality is a tenuous as pumpkin spice, e.g. the posturing of Republicans and Democrats that is just spectacle for the sake of itself. And the rest of those policy experts, talking head and social scientists are no different. MSNBC and Fox News, Barack Obama and John Boehner are the Starbucks of the political realm – they peddle in images, and nothing more.

So next time you drink your pumpkin spice latte, just remember: nothing is real, and nothing matters. Maybe.