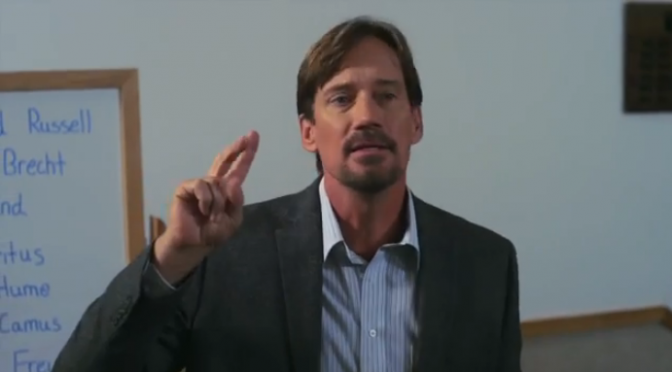 Back in October of 2013 we reported on the film “God’s Not Dead,” the creepy Christian answer to Nietzsche starring Hercules (Kevin Sorbo).  The film tells the story of a devout Christian student as he stands up to his tyrannical philosophy professor who insists that all students declare, in Nietzschean fashion, that God is dead on the first day of class.

The film opened last month on March 21st. The film placed fifth for its first two consecutive weeks at the US box office, proving once and for all there really is no god. To date it has grossed over $52 million.

According to PluggedIn, philosophy Professor Hercules is portrayed as an evangelist of unbelief, pushing the works of Michel Foucault, Richard Dawkins and Albert Camus onto his students.

Unfundamentalist Christians, a blog for people of faith who aren’t insane, took some jabs at the ridiculous tropes of non-believers in the film, calling it a “right-wing fantasy circus.”

“There’s an anti-religious, vegetarian reporter who ambushes one of the Duck Dynasty crew to get him to admit he kills ducks when he hunts them (a very strange scoop indeed). She ends up with cancer and of course converts.”

They continue to note that the Professor Hercules is shown sipping merlot to classical music “while snobbishly condescending to his Christian  girlfriend.”

Sorbo opens his philosophy class by declaring they are going to “bypass debate”—even though debating philosophical positions is the entire point of the discipline of philosophy. Richard Dawkins, an evolutionary biologist, is treated as though he is an academic philosopher (he’s not) and the professor’s students apparently read his mass paperback “The God Delusion” as though it’s an academic text (it’s not).”

At the end of the film, viewers are told the film is inspired by dozens of real life court cases involving God-hating universities targeting students. Audience members are even pointed to legal advocacy group should they face such persecution in their own philosophy classes.

In the meantime, if you’ve received any amusing complaints about the teaching of Nietzsche, Foucault, or any other despicable atheist philosophers, feel free to anonymously forward them along to [email protected]

Or just watch the trailer below.