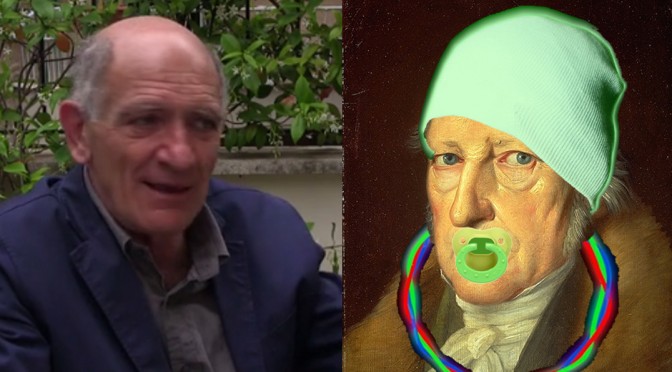 Paolo Virno is an Italian philosopher that doesn’t get much attention here on Critical-Theory, but maybe he should.

Virno, a post-Marxist, is the subject of a new Italian documentary (with English subtitles), that will soon be showing in an upcoming Italian film festival, according to its creator.

Virno recounts telling his students that the problem with rave parties “is not that they destroy your health, but that they are exceptionally boring.” “I told them,” he continues, “even three pages of those really complicated ones from Hegel, compared to techno raves, are much more fun.”

“I’m talking about physical excitement here, not about something spiritual. I mean, the amount of adrenaline that runs in the blood.”

Now, I’ve never been to a rave, and utterly detest clubs because I don’t enjoy profusely sweating in close proximity with other profusely sweating strangers. But I’ve never quite read any philosophy that made me physically exhilarated, though I shouldn’t  rule out the possibility that the the pages of the Italian or German  editions are laced with cocaine – it might explain why America is perpetually lagging in continental philosophy and, well, Slavoj Zizek.

Though we, as philosophers, should ask the hard questions like: “Can we read Hegel at a rave?” A true Hegelian synthesis.