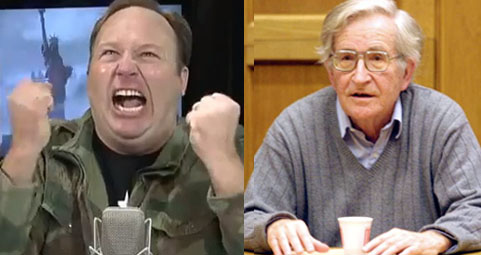 What happens when Noam Chomsky, self-proclaimed anarchist, shows up on a crackpot conspiracy radio show to discuss his ideas? Not a lot apparently, until Chomsky hangs up.

Chomsky appeared on Alex Jones’ radio show, in a clip that was uploaded to YouTube in April, 2013, to discuss his work on propaganda with Jones. Surprisingly, the interview goes pretty swimmingly. Chomsky talks about the manufacturing of consent, Jones mostly agrees with Chomsky while interjecting comments about mind control and the Bilderberg group.

Jones has gotten mainstream attention in the past for being an utterly insane, belligerent, self-aggrandizing asshole. He runs infowars.com, a wonderful little website where one can learn “3 Ways to Avoid FEMA Camps” and the media’s attempt to cover up “anti-white” hate crimes. He’s also convinced that the world is being run secretly by shadowy organizations like the Bilderberg Group, which is funny because, last time I checked, corporations were pretty much fucking us in plain view.

At one point in the generally copacetic interview, Jones asks Chomsky what is to be done against mass media manipulation. And Chomsky, always the gentleman, offers Jones a compliment.

“I think the main solution is the kind of thing you’re doing, I mean people have to be offered the opportunity to, and encouraged to, take the opportunity to think critically,” Chomsky notes. “Not to uncritically accept what you’re told.” Chomsky continues to note that people should not take his words without scrutiny either.

The only tension rises when Jones and Chomsky begin to discuss gun control. Chomsky, who supports gun control, thinks crime can be limited by limiting access to the weapons. Jones vehemently disagrees, citing the banning of guns in London leading to a spike in crime. Chomsky, confused, notes that guns have always been illegal in England. After Jones reminds his audience that all of the “proof” is on infowars.com, Chomsky tells Jones he would need to look into the matter further.

But after the interview ends, Jones tells Chomsky to “Say hello to David Rockefeller for me!” before ending the conversation. David Rockefeller is alleged by conspiracy theorists to be a leading figure in the creation of the “New World Order.” A fitting insult, for a self-professed anarchist.”There goes Noam Chomsky ladies and gentle,” Jones continues. “He’s a new world order shill.”

Not versed in the insults of yesteryear, I had to look up the meaning of “shill.” It’s “One who poses as a satisfied customer or an enthusiastic gambler to dupe bystanders into participating in a swindle.”

But Jones doesn’t stop there. “I had to spank him there in the end and I certainly enjoyed,” Jones said referring their exchange on gun control.  “And I’ve got twice the brain you’ve got with both arms tied behind my back.” Jones continued to make fun of Chomsky’s “professor voice” and called Chomsky’s staff “elitist.”

Listen to the full interview below