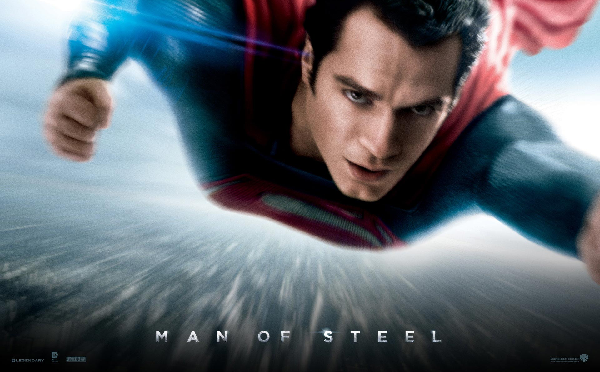 The 2013 summer blockbuster, Man of Steel, both re-affirms and criticizes American identity through the lens of immigration and citizenship.  While many may view it as mere escapism into the world of special effects, its message is anything but neutral.  It is explicitly political.  As Jean Baudrillard argues, “It is by the technological support that each ‘message’ is in the first place transitive towards another ‘message’ … [so that] cinema draws … into language … [in order to produce] the totalitarian message of a consumer society” (42).  To forget that films are political is to ignore how the discourses that shape popular culture inform what society consumes and regurgitates.  In short, film provides the screen upon which society is read and understood.  Man of Steel, complete with the National Guard advertisement screened along with it, participates in this construction of meaning in ways that are anything but subtle.  The techniques in which good and evil are shaped through Man of Steel is very similar to the current immigration debate underway in the United States.  Put simply, the film lays out what it takes to be a super man in America while simultaneously demonizing those who approach identity, democracy, and collective responsibility differently.

From the very beginning of the movie, General Zod and Krypton’s foremost scientific expert, Jor-El, are placed in contrast to one another.  The film wastes no time in highlighting their different approaches to democracy and citizenship.  Jor-El, Superman’s father, contradictory defends both free will and faithful obedience to one’s government.  He does so when he stands by Krypton’s council even as the planet is falling apart and again when he urges his son to trust the people of Earth, even though in many fight scenes the military readily shoots at Superman.  Meanwhile Zod voraciously defends the use of force to ensure the survival of his race while advocating obedience toward one’s genetic history.  There is no uncertainty in the film who is portrayed as good and who is bad even though both approaches require a leap of faith that ultimately sacrifices free will to an external authority.  Nowhere is the film’s construction of the ideal American clearer than when Superman turns himself over to humankind for whatever America deemed best.  Even though Superman maintains that he’s doing it on his own terms his terms always already include a blind obedience to will of the American government.

Man of Steel reads its construction of citizenship against the backdrop of immigration and the war on terrorism through its focus on Superman and Zod’s alien status.  There is not only talk of Clark Kent as a refugee but there is a direct questioning of an alien’s ability to be loyal to America.  This is what leads Superman to declare to the leading US military officer at the end of the film, “I’m from Kansas.  I’m American as it gets.”  Standing in stark contrast is General “Zod [who] wants to destroy the earth’s way of life and create a new Krypton here, while Kal-El wants to preserve his beautiful new home, and does so, by defeating those evil foreigners.”[1]  Outside of the film, Comprehensive Immigration Reform pits populations against one another in order to determine who would be loyal to America and who needs to be kept out [2].  Samuel Chambers, Professor of Political Theory at the University of Wales, points out

Narratives of “the immigrant” have, of course, been central to the building and consolidation of power within the American nation-state. Those narratives have combined a powerful immigrant xenophilia—for the immigrant whose hard work-ethic and old-world values fuel the belief in class mobility and build strong communities—with a toxic xenophobia against the immigrant-as-other who is a parasite on the system and a roadblock to progressive social change. (46)

Similar discourses also appear within representations of model minorities[3] and the potential for immigrants to be terrorists[4].  In all cases there is a binary opposition that valorizes one immigrant population over an-other population, which is seen as threatening due to its construction as more alien and foreign than the first.

While several editorialists, such as Huffington Post writer Sandip Roy[5], remain attentive to the film’s discourse on immigration they limit their reading to advocate for looser immigration policies.  In doing so, they ignore the larger critique of citizenship that exists within Man of Steel.  In fact, what the film makes clear is that, even after saving the world, Superman will still be targeted by drone surveillance and military oversight.  While Superman may find some level of acceptance, “It would be an interesting conundrum to wonder what would have happened if the same man, with the same super-hero powers, had landed on Earth as a brown-skinned or black-skinned man, and whether … there would be a serious problem with this colored man’s ‘potential terrorist’ powers”[6].  Given the use of drones to kill American citizens, it is plain to see that after America had benefited from Superman’s sacrifice were it not Superman this alien would be locked away.  Here we find that

the same valued energies that immigrants bring to refurbish and re-energize the nation can just as quickly be deemed suspicious and turned against them: ‘Their’ admirable hard work and boundless acquisition puts ‘us’ out of jobs. … ‘Their’ voluntarist embrace of America, effective only to the extent that they come from elsewhere, works to reaffirm but also endangers ‘our’ way of life … To praise the achievements of the consenting foreigner creates the conditions for demonising the efforts of the non-consenting foreigner (eg the ‘illegal’ alien).  The ‘bad’ immigrant always shadows the ‘good’ immigrant. … Consequently ‘the iconic good immigrant—the supercitizen—who upholds American liberal democracy is not accidentally or coincidentally partnered with the iconic bad immigrant who threatens to tear it down’. (Nyers 1077)

To assume immigration and citizenship hold the answer to equality is to assume everyone has the same privilege as Superman to display the extraordinary skills necessary to be given a legal status; even though the very ordinary skills of illegal agricultural immigrants are just as important to the survival of America.  At the same time it ignores how, even after gaining acceptance, Superman will always be marked as different in ways that can very readily turn his skills into threats that must be contained.

It is interesting to note that, while Jor-El was Krypton’s foremost scientist, Clark Kent takes his inspiration from a Priest who convinces him to submit to humankind by saying, “Sometimes you have to take a leap of faith first.  The trust part comes later.”  On the other end of the spectrum, Zod’s commanding officer, Faora-Ul, explains how their inspiration comes from evolution and their belief in the survival of the fittest.  This is what justifies their invasion of Earth.  As a result, it is not an appeal to truth or reason that is valorized in the film.  Instead it is the blind obedience of taking a leap of faith into the higher power of democracy and government—whether it is on this world or the next—which is championed.  The use of science or reason to disprove the already existing order is demonized due to its attempt to gain mastery over old ways of understanding and ordering existence.  Even when these constructions of humanity are designed to protect life they are oftentimes equally as destructive.  “Humanitarian interventions, for example, often make use of the language of the nation-state. … [I]nterventions, particularly around refugee crises, … reinforces an international definition of life, rights and belonging. … A sovereign ruling over such groups is no longer liberal and national, but bio-political and global” (Caldwell 35).  Hoping to gain acceptance and citizenship through faith will no sooner result in trust than Jor-El’s respect for Krypton’s council would have been able to save his son.  It took Zod’s act of rebellion to push Jor-El’s hand into defying the council and propelling the film’s plot into motion in the first place.  We must act on more than faith alone since absolute obedience to the logic of citizenship will never be the answer.

A better solution might be to abandon obedience and citizenship altogether.  To be clear this does not mean we must necessarily take up arms like General Zod.  Rather,

If those who have no part are to see themselves as equal to those who have a part, then they must also see those who have a part as equal to them. … This requires political action to be more than just a struggle for suppression of the adversary, even where the adversary engages in cynical domination. … In the framework of a political orientation whose task is to declassify, nonviolent action carries with it more radical possibilities for declassification than the simple inversion that is the standard consequence of violent resistance.  If this line of thinking is right … then the perspective that Rancière has opened for us is not so much a framework within which we can fit our political thinking as it is a door through which we must walk in order better to reflect upon that thinking. … In this sense, anarchism lies before us rather than behind us, as a political task to be thought and engaged rather than as a historical footnote to be buried alongside other challenges to the pervasive and multifarious dominations of our world. (May 34-35)

To go beyond citizenship then requires us to move beyond the nation-state, global governance, or intergalactic politics.  It is to dispel the center circle of inclusion in order to craft a new identity that works to declassify aliens entirely, instead of merely reclassifying some as unthreatening.  It is up to us to carve that path through the many fictions that inform reality in the time before Man of Steel’s inevitable sequel is released [7].  To read the film critically in order to craft a new productive form of identity mandates treating it as every bit as political as the evening news.  The fact that the movie isn’t real is inconsequential since fiction has always “anticipated truth and truth [has always] provoked more fiction” in order to yield “a profusion of tales developing its implications, good or evil, for the future of humankind” (Wagner 448).  Where we will go tomorrow is often built on the dreams of today.  Man of Steel both informs our understandings of what it takes to be a super citizen and hints at a more fruitful direction society can evolve by leaving behind the kryptonite of citizenship.

Caldwell, Anne.  “Bio-Sovereignty and the Emergence of Humanity.”  Theory and Event.  Vol. 7

Nyers, Peter.  “Abject Cosmopolitanism: The Politics of Protection in the Anti-Deportation