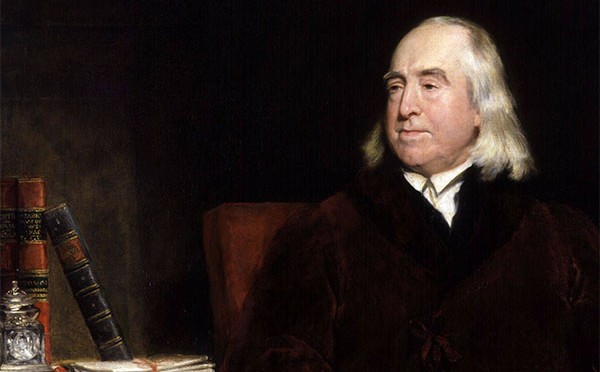 Jeremy Bentham was an English philosopher who will be forever known to critical theorists as “that asshole that invented the panopticon.”  He was also a proponent of utilitarianism and animal rights.

So what does a utilitarian ask for in the last days of his life?  Well, it just so happens to be the coolest thing ever: Bentham wanted an auto-icon made of himself.  What’s an auto-icon? I’m glad you asked, because it’s Bentham-speak for “put my preserved corpse in a closet…forever.” Oh, did I say skeleton? Because half of this thing is a skeleton.Bentham didn’t want his whole body preserved, no, that would be crazy. Bentham requested that his head be mummified using the process performed by indigenous New Zealanders. The rest of his body, or specifically his skeleton, would be stuffed with hay and adorned with Bentham’s clothes. Because apparently the world’s most pre-eminent utilitarian wants to be forever remembered as the coolest scarecrow ever.

But it gets better. The whole “guy attempting a foreign mummification process” went as swimmingly as you’d expect. As the University College London site notes: “Unfortunately when the time came to preserve it for posterity, the process went disastrously wrong, robbing the head of most of its facial expression, and leaving it decidedly unattractive.” So the head you see is, in fact, made of wax. Don’t worry though, Bentham’s horrifying mummified head is still preserved nearby.

The University College London (UCL) eventually gained possession of the icon, where it has  remained since 1850. There is a myth that Bentham’s auto-icon still attends every UCL meeting and is noted as “present but not voting.” While that is false, the auto-icon did make an appearance this month for the last council meeting that UCL’s retiring provost would attend. I’d like to request that all Critical-Theory readers email University College London and demand immediate production of “Weekend at Bernies III: The Funopticon.”