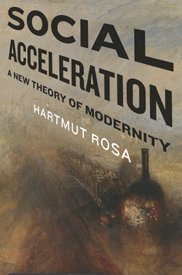 Talk of social acceleration is everywhere. Technophiles boast about the ever-increasing pace of computer advances, your grandparents are perpetually confused and angered by your worthless gadgets, and cultural fads seems to come and go faster than they ever have.

Despite the overwhelming popular consensus that the pace of technology and life is ever-accelerating, there is an underwhelming scholarship to explain it. That’s because a careful examination of the topic brings up hard to answer questions. How do we measure this so-called acceleration? How do you rate the “acceleration” of innovation in rail transport vs. computers (spoiler: you can’t).

strongly defends the idea that our society is, in fact, accelerating. While that sounds fairly straight forward, and somewhat boring, Rosa manages to complicate (for the better) the question of time to explain how time functions as a social structure.

“But wait!”, you ask, “that’s what Marxists have been saying for years.” After all, it’s the technological development of capitalist production that undergirds all of this accelerating business. Advances in computers, transportation and machinery are all pushed by the capital’s quest to squeeze more surplus value out of its laborers.

There is certainly no shortage of social scientists who defend the view that in the end it is the economic motor alone that is responsible for the accelerative tendency of modernity… Accordingly, acceleration has transformed  from an economic/technical factor into a cultural one because the acceleration and escalation of production inevitably demands the growth of consumptions and circulation.

But what Rosa is arguing is far more nuanced, and somewhat contradictory, to the Marxist argument.  He argues:

However, this kind of reductionistic interpretation seems inadequate on two grounds. In the first place, it is precisely not capable of clarifying the process that mediates between economic structural imperative and subjective acceleration of their consumption behavior and thus their pace of life when for them it is not only the case that they have no economic incentive to do so but also that it would land them in financial difficulty…In the second place, the materialistic reduction remains blind to the ideational and cultural presuppositions of the unleashing of the forces of production and acceleration, as the representatives of a cultural criticism of the economic primacy thesis would argue.

Amid all of this talk of acceleration, that are in fact zones of strategic “deceleration” that serve ideological purposes. “Unplugging” oneself from technology, the proliferation of yoga and meditation, and the recreational return to the “old ways” of woodworking, fishing, hunting etc are all ideological tools to offset the havoc that social acceleration has wrought on our society. There’s probably a Ron Swanson joke somewhere in there.

But there is a more malicious form of deceleration, where entire communities are “stuck behind” the technical acceleration that surrounds them. As the pace of society increases, so too does the danger of falling behind. Whether this is a middle-aged worker’s sudden obsolescence in the face of new softwares to master or the ghetto-ization of communities that lack access to the computers, technologies and skills that are necessary for economic security. Poverty and inequality for Rosa, is partly temporal.

But the increasing speed of technical innovation, societal change, and the pace of life hasn’t thrust us forward into history but rather destroyed it. Rosa invokes the idea of “frenetic standstill,” wherein “nothing remains the way it is while at the same time nothing essentially changes.”  Rosa argues that are currently speeding into a post-historical void, with no path or direction. The argument is not entirely unlike that of Herbert Marcuse in One Dimensional Man, where dialectics have been replaced by the one-dimensionality of technical progress.

And there are, of course, more concrete political consequences to social acceleration, namely that “politics has run out of time.”  The complexity of society and the decisions needed to govern it have become too fast for genuine democratic control. Nation states are faced with the option to charge ahead into the technological abyss in the hopes of staking out some future control or being left behind in the dust. Rosa gives a telling examples, where German chancellor Schroeder argued that Germany had no choice but to say “yes” to embryo cloning if it ever wanted control the technology in the future. That is, for Rosa, the “renunciation of political control today in order to preserve potential future opportunities of control.”

When I first picked up this book, I was looking forward to a leisurely reading on obscurantist Heideggerian bullshit. I was wrong.  But once I got over  my deep disappointment that the book was, in fact, intelligible and not littered with ramblings about dasein, I began to appreciate the book for what it was.

Social Acceleration is a work of sociology, and as such it is an academic text. But Rosa’s book is not academic  in the peppered-with-obscure-references way. Stylistically, Social Acceleration reads more like a textbook. Graphs and diagrams fill the pages to outline Rosa’s thought for visual learns. One in which Rosa has diligently and thoughtfully examined the existing empirical and theoretical texts on time, temporal structures and social acceleration. At time the book reads like a taxonomy of these aforementioned fields. At other moments, Rosa interjects his dry analysis with biting cultural criticism.

This book would make a welcome addition to the bookshelf of anybody interested in the works of Jacques Elluls, Herbert Marcuse, Paul Virilio, or any other cultural criticism of technological progress. Any young students interested in breaking into this field will find an incredibly well-researched book to jumpstart their studies.