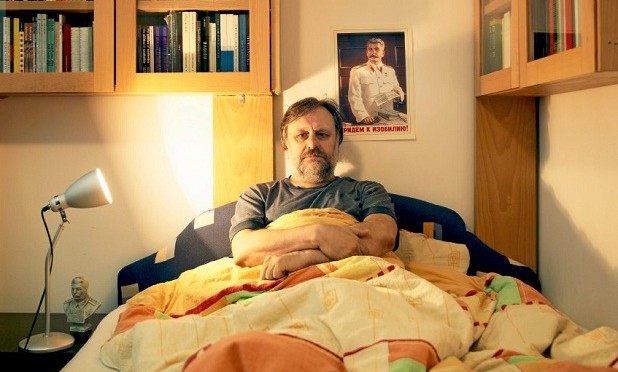 A perplexed individual recently took to Reddit, the internet’s one-stop-shop for unbridled misogyny and cat pictures,  and sought advice for a timeless predicament: Should I be upset by the bearded man whose gracefully watches over my partner while they sleep?

Posting on /r/relationships, Reddit’s go-to for inane relationship advice, the anonymous Redditor explains his quarrel with his girlfriend over a poster of “some apparently famous philosopher guy named Slavoj Zijek[sic]” adorning her wall.   Should he be jealous?

My girlfriend (22f) and I (24m) are having a disagreement about a picture.

I met my girlfriend, Sam, 8 months ago at a house party and we’ve been pretty much inseparable since then. She’s witty, intelligent, funny and gorgeous and we are almost the perfect couple.

The only issue I’ve been having recently is a framed picture she keeps over her bed. It’s of an older gentleman lying in bed with a scowl on his face. She lives with roommates and I live alone so we spend most of our time together at my place and I’ve only been in her room a couple times so I’ve never really brought it up.

For a while I just figured it was a relative of some sort (Sam is African American but this is a picture of a white guy) until recently I met her extended family at a birthday party for her cousin. On the way back I asked who the picture in her bedroom is of, since it’s not anyone I met at the party. She started laughing at me and explained that the picture is of some apparently famous philosopher guy named Slavoj Zijek (I don’t know if that’s spelled right) and she doesn’t know him. WTF. We started arguing about it, I said it was weird to keep pictures of random people in your bedroom and she said it was somehow ‘pomo’, I don’t know what that means, her major is philosophy and mine is computer science.

TL;DR: girlfriend keeps picture of a philosopher on her bedroom wall. I’m weirded out and kind of jealous that this guy is apparently so important to her that she has a random picture of him above her bed. Am I overreacting though?

It’s probably a troll, but a brilliant one at that.