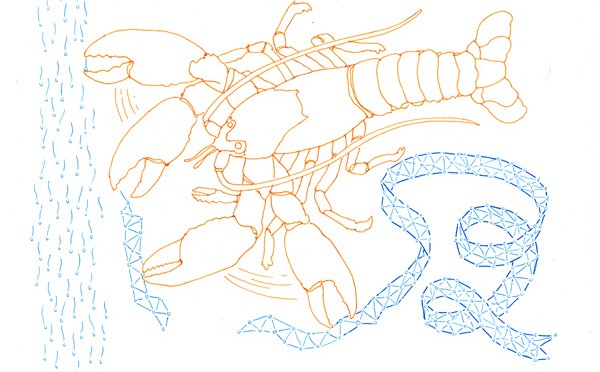 Ever thought the bizarre images portrayed by Deleuze and Guattari in their books would make for good art? God is a lobster, Judge Schreber’s solar anus, bodies without organs, and so on.

Ngui has previously illustrated first two chapters of “A Thousand Plateaus,” which you can purchase on Etsy from the artist directly. Ngui’s Tumblr is currently only up to paragraph 11 of “10,000 BC,” so we hope to see many more.

Here are some of our favorites, but check them all out on Ngui’s Tumblr. We’ve appended the proper quotes from the book.

God is a Lobster, or a double pincer, a double bind. Not only do strata come at least in pairs, but in a different way each stratum is double (it itself has several layers). Each stratum exhibits phenomena constitutive of double articulation. Articulate twice, B-A, BA. This is not at all to say that the strata speak or are language based. Double articulation is so extremely variable that we cannot begin with a general model, only a relatively simple case. The first articulation chooses or deducts, from unstable particle-flows, metastable molecular or quasi-molecular units{substances) upon which it imposes a statistical order of connections and successions (forms).

The same Professor Challenger who made the Earth scream with his pain machine, as described by Arthur Conan Doyle, gave a lecture after mixing several textbooks on geology and biology in a fashion befitting his simian disposition. He explained that the Earth—the Deterritorialized, the Glacial, the giant Molecule—is a body without organs. This body without organs is permeated by unformed, unstable matters, by flows in all directions, by free intensities or nomadic singularities, by mad or transitory particles. That, however, was not the question at hand. For there simultaneously occurs upon the earth a very important, inevitable phenomenon that is beneficial in many respects and unfortunate in many others: stratification. Strata are Layers, Belts. They consist of giving form to matters, of imprisoning intensities or locking singularities into systems of resonance and redundancy, of producing upon the body of the earth molecules large and small and organizing them into molar aggregates. Strata are acts of capture, they are like “black holes” or occlusions striving to seize whatever comes within their reach.1 They operate by coding and territorialization upon the earth; they proceed simultaneously by code and by territoriality. The strata are judgments of God; stratification in general is the entire system of the judgment of God (but the earth, or the body without organs, constantly eludes that judgment, flees and becomes destratified, decoded, deterritorialized).

He used the term matter for the plane of consistency or Body without Organs, in other words, the unformed, unorganized, nonstratified, or destratified body and all its flows: subatomic and submolecular particles, pure intensities, prevital and prephysical free singularities. He used the term content for formed matters, which would now have to be considered from two points of view: substance, insofar as these matters are “chosen,” and form, insofar as they are chosen in a certain order {substance and form of content). He used the term expression for functional structures, which would also have to be considered from two points of view: the organization of their own specific form, and substances insofar as they form compounds (form and content of expression). A stratum always has a dimension of the expressible or of expression serving as the basis for a relative invariance; for example, nucleic sequences are inseparable from a relatively invariant expression by means of which they determine the compounds, organs, and functions of the organism.5 To express is always to sing the glory of God.