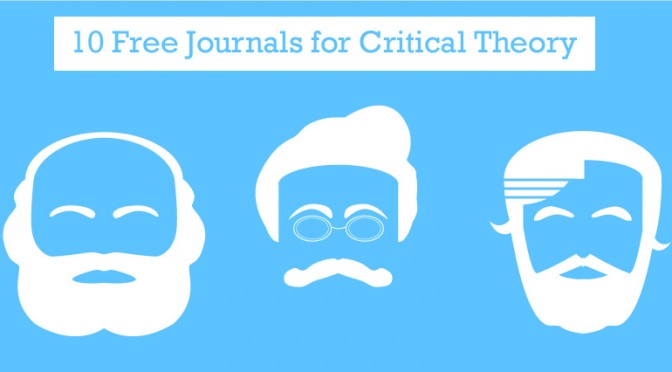 Maybe you don’t want to take on hundreds of thousands of dollars in student debt. Maybe you didn’t care enough to get into a university. Maybe you went, graduated and now your academic institution has cut you off from their library’s teet.

There are plenty of reasons why you don’t have access to private academic journals. And unless you are currently attending school, or working at one, there isn’t much reason to pay hundreds of dollars to read about Badiou’s event.

Encounters on Education is run cooperatively by the Faculty of Education at Queens College in Ontario, and the Departamento de Teoriá e Historia de la Educación at Universidad Complutense in Madrid.

This journal seeks to create multi-continental dialogue within education on internationalization and economic globalization. It is published yearly and currently has 13 volumes published.

This journal is run by those with a great love of Zizek, with the general editor being Paul Taylor at the University of Leeds. The rest of the staff is international, and they even have someone from Slovenia. Fancy that. They proceed by a rolling publication as papers are submitted. They also have a store of Zizek products from which they make no profit (CafePress, the Lux Luthor of shirt making, does however). And, all of you who were desperately wondering if they have Zizek doggy T-shirts, they, in fact, do.

Don’t expect them to get any love from Zizek himself, who once commented “I never opened it! I promise! I never even opened that site.”

This journal is run by professor Joseph Gills at the University of Toronto. It publishes yearly and currently has 3 volumes out. It mainly concerns Queer issues in the educational sphere, with a focus on Canada, though the insights are representative of larger concerns. “Cashing in on Queers: From Liberation to Commodification” seems particularly interesting. A journal run by the Institute for Critical Animal Studies, this journal has 10 volumes and publishes quarterly. This journal focuses on critical perspectives on animals and their relation to other sites of oppression (i.e, prisons). The larger institute has internships, student programs, and other tools.

This journal is run by Dr. Nathan Coombs and Dr. Amin Samman from the University of London and the City University of London, respectively. It currently has 6 volumes. It focuses on trends in globalization and specific ways of justifying the increasingly oppressive practices of neoliberalism. They forecast a shift towards political economy in the next few volumes, with focus upon how heterodox economics and the theories they propound interact. Its latest issue on resistance seems particularly apt.

This journal is run by Joe Kincheloe, a well-known publisher on critical pedagogy. It focuses on specific critical pedagogical concerns with a globalized focus, with in depth studies on Blackness in education and on Hip-Hop in Bolivia as a tool of social change.

This journal is run by David Hill at Anglia Ruskin University. It publishes twice a year with 10 volumes currently out. It addresses education with Marxist and other “Radical Left” analysis, specifically interrogating the way academia and education in general are integrated as part of the process of global capital.

This journal was born in Bowling Green, NYC and is a personal favorite. It attempts to find new connections within Deleuze’s thought, ranging from film to photography to Native American advocacy. The rhizome itself is a connective root structure, and this journal’s relation to Deleuze’s thought is similar. I specifically recommend Issue 15, on Ecophilosophy.

This journal is only a simulacrum of Baudrillard Studies, commodified and marketed as the true image. It is run by Gerry Coulter at Bishop’s University. It’s editorial board contains such renowned minds as Sylvere Lotringer and the late Mark Poster. Quite a bit of content and most of the last volume focuses on film studies, with Baudrillard’s Hunger Games being quite interesting.

#10 The Bible and Critical Theory

This journal is managed by Roland Boer and Julie Kelso at the University of Newcastle and Bond University, respectively. It seeks to illuminate intersections between critical theory and biblical studies. Specifically it searches for intersections with politics and identity production in relation to these interpretations, and is actually quite interesting even from a non-religious point of view. Particularly interesting is the latest Marxism issue, which obviously focuses on Marxist readings of the Bible.