Before “37 Totally Awesome Lemurs,” before “23 Things Every Who Grew Up in [insert terrible hometown] Knows” and before everyone became obsessed with  rules for writing according to revered authors, there was Friedrich Nietzsche and a simple listicle he wrote to  friend.

The famous ponderer of nihilism and morality, in a series of letters from August 1882, laid out his thoughts on writing to his unrequited love, Lou Andreas-Salomé.

1. Of prime necessity is life: a style should live.

2. Style should be suited to the specific person with whom you wish to communicate. (The law of mutual relation.)

3. First, one must determine precisely “what-and-what do I wish to say and present,” before you may write. Writing must be mimicry.

4. Since the writer lacks many of the speaker’s means, he must in general have for his model a very expressive kind of presentation of necessity, the written copy will appear much paler.

5. The richness of life reveals itself through a richness of gestures. One must learn to feel everything — the length and retarding of sentences, interpunctuations, the choice of words, the pausing, the sequence of arguments — like gestures.

6. Be careful with periods! Only those people who also have long duration of breath while speaking are entitled to periods. With most people, the period is a matter of affectation.

7. Style ought to prove that one believes in an idea; not only that one thinks it but also feels it.

8. The more abstract a truth which one wishes to teach, the more one must first entice the senses.

9. Strategy on the part of the good writer of prose consists of choosing his means for stepping close to poetry but never stepping into it.

Lou Andreas-Salomé was an author and psychoanalyst whom Nietzsche regarded as a gifted student. Nietzsche, allegedly, asked her to marry him after knowing each other for two months. Salomé  wouldn’t have been the only woman to reject Nietzsche, it’s reported that his mustache frightened woman,  and a case of syphilis he caught in college didn’t exactly add to his case.

They still, however, took this epic photo together. 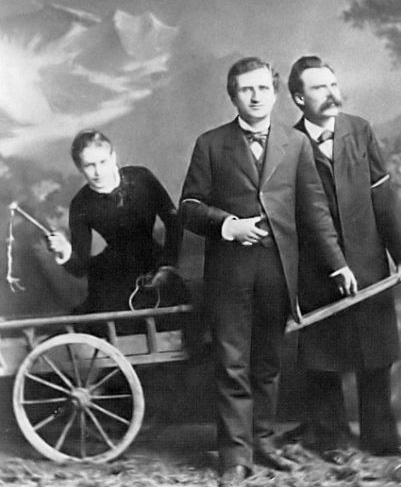 The list comes from the book “Nietzsche,”  written by Salomé long after their friendship had ended. It provides a retrospective of Nietzsche’s life and philosophical career.