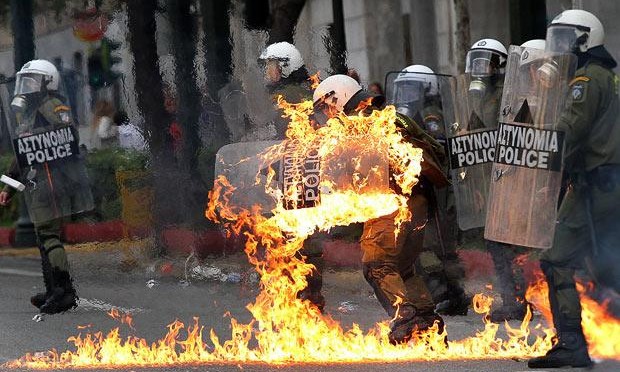 CFP: Theoria: The Police and the Theory of the State

The editors of Theoria: A journal of Social and Political Theory invite contributors to interrogate contemporary political and social theory through the lens of policing, with the view of connecting politics and policing. Well documented reflections based on a variety of case studies would be welcomed, with a non exclusive privilege given to the ‘Global South’.

“No government can maintain the rights of the citizens without a rigorous police force; but the difference between a free regime and a tyrannical one is that, in the former, the police is being employed against the minority, opposed to the general good, as well as against the abuses and negligences of the authority; while in the latter, the State’s police is being used against the poor offered to the injustice and the impunity of power.”

This claim was made in April 1794 by the french revolutionary Saint-Just. Redeployed and redefined in the burning context of the Terror and necessity to terminate it, some of the most classical concepts of the history of political thought (Freedom vs tyranny, General good vs particular interest, elite accountability vs impunity of power) provided the ideological principles framing the organization of a new police force. By doing so, Saint-Just’s claim might well represent the introduction of the question of policing, in the current signification of the term, into the realm of modern political thought and the theory of the State.

However, if the police, an institution by nature ambiguous (P. Napoli, Naissance de la police moderne, 1997), is at the core of contemporary politics, and a central object of literature and cinema, contemporary political theory has generally disregarded the question of policing. The main reason might be that it requires us to think about politics and general principles through history, practices, techniques, means of action, and ‘tainted occupations’. A recent phenomenon in the social sciences, the theory of policing formed its first paradigm precisely by rejecting any formulation aiming at linking policing and politics. It had defined the role of the police through its allegedly more specific element: its capacity and license to use force (E. Bittner, The Functions of the Police in Modern Society, 1970). This paradigm has oriented most sociological research on police: either they focused on the professionalization of the agents, describing it as a central element of the civilizing process, or they focused on the brutality and abuses of the same agents, showing the civilizing process as reversible.

This paradigm was recently scrutinized with the aim of providing a more complete, comprehensive and systematic theory of policing (J.-P. Brodeur, The Policing Web, 2010, chap. 4).

– A major dimension of policing now reintegrated into the framework of analysis is ‘high political policing’, such as intelligence work (Brodeur 2010, chap. 7), already conceived by Saint-Just as a political activity at the core of a modern democratic police. This points to another set of questions concerning the lack of interest in policing in contemporary political theory: considering the nature and function of policing leads to the interrogation of the practical as well as doctrinal place of Reason of state and secrecy in liberal democracy, and in the theory of liberal democracy.

– A second important dimension reintegrated into the theory of policing is ‘military policing’, in particular in the sense of militarized forces in charge of maintaining order and riot control (Brodeur 2010, chap. 9). Amongst other worldwide events inviting to reconceptualize the distinction between protest and sedition, the recent events of Marikana, when a special unit of the South African Police service opened fire against striking mineworkers, illustrated in the most spectacular way what it is when ‘the State’s police is being used against the poor’. It raised many questions about the situation of the right to life, the right to protest, and the maintenance of order in the post apartheid era. It points out also the necessity to develop the reflection on the doctrines, norms, practices and techniques of policing protest.

These two dimensions (‘high political policing’ and ‘military policing’) taken together generate the following question: what does the ongoing process of normalizing the state of exception and emergency measures – ranging from the demand for general control of common citizens to the use of massacre against protestors – say about the state of the society, and the theory of the state and of democracy?

– recent action movies (e.g. Padilha’s Tropa de Elite on the brazilian BOPE) as well as classical thriller (e.g. Rosi’s Illustrious Corpses on mafia, terrorism and the state). Is there a theory of the State and of the State’s action emerging of the genre?

– historical experiences in setting up dedicated units in charge of policing protest, tending to exclude massacre from the repertory of actions (e.g. the French CRS), and more recent developments.

– recent trends in policing studies in the Social sciences as well as in History (e.g. critical accounts on the impact of postcolonial studies in evaluating the current practices of maintaining order in the ‘Global North’)

– evaluations of Brodeur’s framework of analysis in the context of the policing web in South africa and the ‘Global South’; its implications for a general theory of the state.

– the place of Reason of state, secrecy and exception, from the point of view of policing, in contemporary theories of the state and of the liberal democracy (e.g. how to situate the heritage of Carl Schmitt or of Michel Foucault – the former showing a nostalgia for the medieval conception of the mystery of the State, the second discovering the doctrine of Raison d’Etat after he published Discipline and Punish – in that undertaking?).