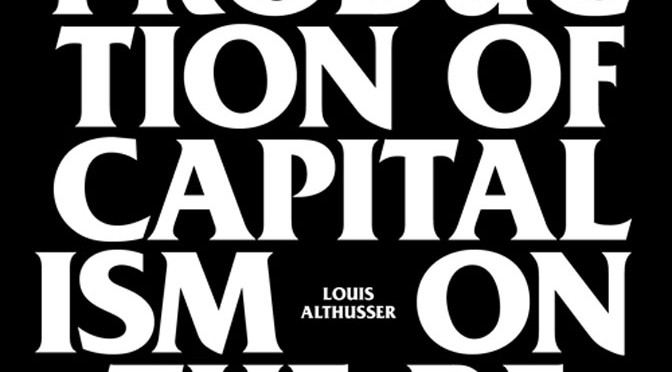 So how does capitalism justify itself in the face of massive exploitation and suffering?  The law.

Now, of course, law existed before capitalism and may exist after it falls. But for Althusser, law is always a “function of the existing relations of productions.” Law even goes so far as to make those relations “disappear,” Althusser argues. It’s fucking magic.

That it to say, for law to function it must inscribe certain things outside the law.  Conceptions of “freedom” and “equality” are axiomatic principles that the law both rests on and creates – legal rights are not intelligible without these ideas. In this case, “freedom” is a “freedom to enter into contracts” aka the freedom to be exploited. It is in this way the law hides its foundation in capitalist exploitation.

But hold on there, radical socialist comrades. Althusser thinks you’re doing it wrong too. In a handy footnote, Althusser notes that “economic democracy” is, from a Marxist perspective,  a “piece  of nonsense.” “Democracy” he notes is a political program, not economic. And because everything is defined by the economic base, you’re doing it wrong.  And for those who seek remedies through a collective ownership – shame on you, capitalist pig! “Ownership,” he reminds us, is a legal concept. And “all law is by essence, in the last instance, inegalitarian and bourgeois.”

The State and Ideological Apparatuses

The biggest misconception of the state, for Althusser, is that the state is a mere instrument of class exploitation. In that view, the Koch brothers get to bribe politicians with a few million dollars while they go on whimsical journeys around the world on a mega-yacht fueled by broken dreams  and the tears of the proletariat. In this instrumental view, we just have have to stop this bourgeois fuckery and make sure the state serves the interest of the proletariat.

This is also bourgeois nonsense, according to Althusser. That’s because (and here is where his disagreement with the Frankfurt School can be seen), it relies on a conception of people as active subjects, able to overcome and resist. Individuals are not the engine of history.

The state is first and foremost a repressive apparatus. Sure, you don’t need a regular police beating to remind you that bank robbery, gay marriage and revolution are illegal. But you do know if you tried, you’re pretty boned from the start.  The threat of direct physical enforcement on behalf of the state is always looming in the air.

In the traditional Marxist view, these state apparatuses consists of what we generally consider the government: the police,  the various governmental agencies, that website where we can ask the president to deport Justin Bieber and so on.