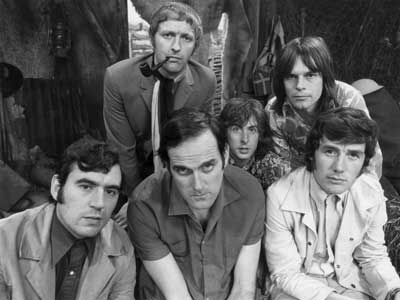 The Monty Python gang is no stranger to high-minded humor. We’ve previously talked about their philosophy soccer match. There is also the “Communist Party Trivia” sketch.

In this video, the gang sings “Bruces’ Philosopher Song,” with some subtle references to the theories of each philosopher as a drunk.

Video and lyrics below.

Immanuel Kant was a real pissant
Who was very rarely stable.
Heidegger, Heidegger was a boozy beggar
Who could think you under the table.
David Hume could out-consume
Schopenhauer and Hegel,
And Wittgenstein was a beery swine
Who was just as schloshed as Schlegel.

There’s nothing Nietzsche couldn’t teach ya’
‘Bout the raising of the wrist.
Socrates, himself, was permanently pissed

John Stuart Mill, of his own free will,
On half a pint of shandy was particularly ill.
Plato, they say, could stick it away;
Half a crate of whiskey every day.
Aristotle, Aristotle was a bugger for the bottle,
Hobbes was fond of his dram,
And Rene Descartes was a drunken fart: “I drink, therefore I am”
Yes, Socrates, himself, is particularly missed;
A lovely little thinker but a bugger when he’s pissed!