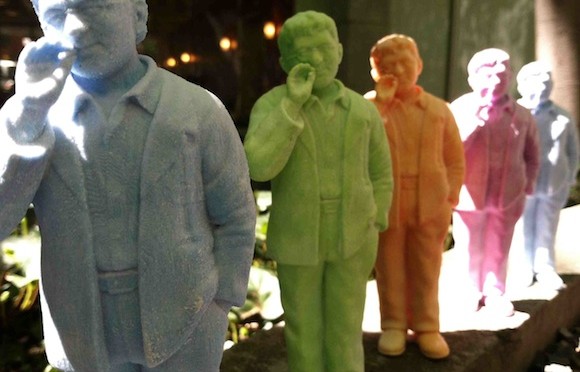 Kim Kierkegaardashian is an amazing Twitter account that mashes together the philosophy of Søren Kierkegaard with tweets from Kim Kardashian. Kierkegaard is a super awesome philosopher that I’m too lazy to read, and Kardashian is some lady who is famous for no reason in particular. So what does that have to do with detournement? Lots, says McKenzie Wark, a professor at the New School for Hipster Research.

First, what is detournament? Well first, it’s actually détournement and it’s French for “turnabout”, “derailment” and means “hijacking” when you’re talking about airplanes. It’s a political strategy advocated by a bunch of French trolls like Guy Debord and The Situationists that generally involves fucking with corporate media messages for the lolz.

I followed that one for a while; it’s hilarious. I kind of love that stuff because it’s so revealing. The side of culture that’s really a giant automatic repurposing machine. Can you build a bot that would, for example, build sentences? And then flip that into the space where it’s the negative, the critique of that very practice? Can you create protocols using a search engine to generate language? That reveals exactly the great poison sea we’re swimming in.

Rhizome’s Brendan Byrne interviews Wark about his most recent book “The Spectacle of Disintegration.”

Wark harps on creatives who yearn for the good ol’ days (spoiler, there were no good old days) and Google’s culture of “Information is free! Give us millions of dollars!”

Wark went on to tell everyone to stop being a whiny asshole about technology:

…The most common mistake is to mistake the current form of a technology for technology at its basic potential. How many times do we have to do the same old stupid bullshit over and over again? It’s all one-sided and undialectical and frankly very uninteresting. So alright you don’t like technology. Technology is the human. We’re the tool-making species. There is no human independent from its tool apparatus. The question is: does it have to be these tools? Absolutely not. So how does one reimagine the potential, the set of the scientific discoveries and their technical applications, and open up so life could be otherwise? That’s the critical task. There’s an absolute failure to perform the critical task in relation to technology. There’s a kind of “No, I don’t like the iPhone.” Well, what the fuck do you like then? What do you want? Describe another world. Describe it to me. For seven billion people.  Among the Situationists, someone like Constant Nieuwenhuys did exactly that, he imagined an entire other planet based on mid 20th Century technology. That’s more of a conceptual exercise than a real engineering project, but it opens a door to asking question about how, well, how do you reengineer cities? So that they’re survivable would do for a start, but better than. We really could abolish work, y’know? Not completely. But we could really get it down to a few hours a day. So, well, how’s that project going? We’re gonna run out of cheap labor eventually. It can’t go on forever. There’s signs that China has turned a corner. They just don’t wanna do these boring factory jobs. Alright, so we’ll go exploit cheap labor in Vietnam. But it can’t go on forever. So that opens the question of, well, we’re only using this cheap labor ‘cause it’s so cheap, sitting there all day with a screwdriver assembling those cheap plastic toys. Now you look at all those plastic toys with ten screws in them. Well, they’re only designed to have ten screws because it’s cheaper to use the labor than to design the fucking thing properly so it snaps together. So at some point technology has to be part of the critical conversation. And that’s where hackspace culture, hacker culture, some of maker culture, is so incredibly helpful. It’s equipping people with a basic knowledge of how our world actually works. But you have to add the question of how could it work better, how could it work differently. And as a totality, not just “I want a better widget.” What would be a better system? That’s the whole critical design question. The central question to me now is the avant garde of design.

If you live in the UK, for the love of god enter to win a 3d-printed Guy Debord.

Read the full article on Rhizome [via Verso]