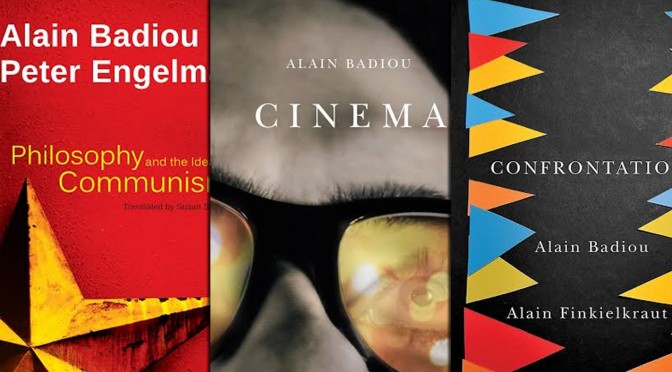 This week, we’re giving away three Alain Badiou titles to one lucky one winner thanks to Polity Press.

The winner will receive a copy of 3 Badiou titles from Polity “Cinema,” “Confrontation: A Conversation with Aude Lancelin,” and “Philosophy and the Idea of Communism: Alain Badiou in Conversation with Peter Engelmann.”

In “Cinema,” Badiou contends that “cinema is an art form that bears withness to the Other and renders human presence visible, thus testifying to the universal value of human existence and human freedom.” “Confrontation” is a debate between Badiou and Alan Finkielkraut moderated by Aude Lancelin. The two go head-to-head on topics such as identity, Israel and Judaism, May 68 and communism. In “Philosophy and the Idea of Communism,” Badiou elaborates with conversant Peter Engelmann his continuing political work.

To enter, follow the instruction below with Rafflecopter. Contestants must follow Polity and Critical-Theory on Twitter, contestants will receive an extra chance of winning for re-tweeting the contest.